After an unfortunate incident last week at Arizona, Uber is suspending its autonomous car test program in the region. While in its autonomous driving mode; a Volvo SUV was spotted on its side after a collision with another car in Tempe, Arizona. This crash was spotted by Fresco News’ user, Mark Beach; who also photographed it, according to Reuters. Fresco News has posted the picture on the social media platform, Twitter. In concern to the safety requirements for autonomous driving; two safety drivers were seated in Uber’s car. Uber has reportedly mentioned that no fatal injuries are reported and that the car did not carry any backseat passengers.

Josie Montenegro, a spokesperson from the Tempe Police Department stated that the ride-hailing company is not at fault for this accident. Montenegro added that the incident happened due to the driver of another car; who reportedly ‘failed to yield’ to Uber’s self-driving vehicle, due to which the autonomous car rolled on its side. As of now the Police department is unsure if the person behind the wheel was controlling the SUV at the time of the crash or not. Even though the Tempe police department has given this statement; a report on TechCrunch notes that there are possibilities of the vehicle being at unnecessary high speed as the fact is that the Volvo SUV had rolled over on its side. 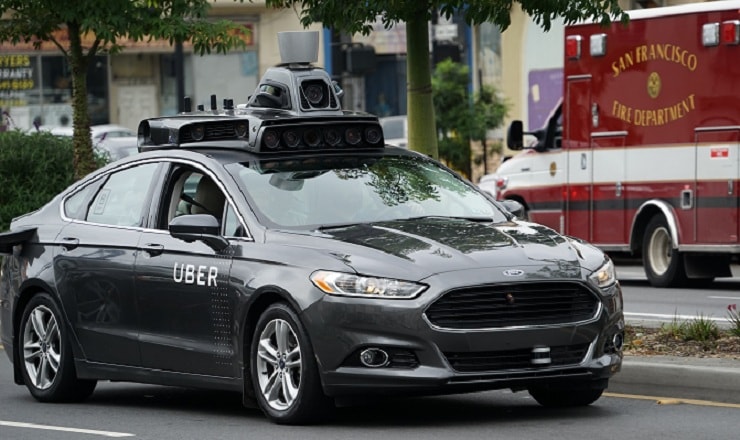 After this ill-fated incident; Uber is suspending its self-driving pilot program in the Arizona region, for as long as the investigation is not over. Uber Technologies had begun testing its autonomous vehicles for the first time in August 2016, in Pittsburgh. But it pulled back the self-driving vehicles in December; followed by a ban from San Francisco authorities regarding permission for autonomous vehicle testing, reported Bloomberg.

Followed by an invitation from Doug Ducey, Arizona’s Governor; it had launched its trial program in Tempe, in February. During the launch of the ride-hailing company’s pilot program in Pittsburgh; Uber had informed that autonomous cars need human involvement in various conditions including rough weather. During that time, the San Francisco, California company had said that self-driving technology has the potential to reduce traffic accidents in the country.

Uber Technologies in the Midst of a Controversial Ride

Uber is in the middle of a huge crisis; dealing with issues regarding workplace ethics, sexual harassments, a #DeleteUber campaign, resignation of former President Jeff Jones and other important executives, CEO Travis Kalanick in need of leadership help and a second-in command, and employee exploitation. Its autonomous unit also faces sensitive issues. Google Alphabet’s self-driving unit Waymo has reportedly alleged theft of technology secrets and sued Uber Technologies for the same.

Between the strings of knee-deep controversies that the ride-sharing company is facing currently; it may take a while before people can see Uber’s autonomous vehicles on the roads again.

JPMorgan Chase, the largest bank in America by assets reported favorable results on Wednesday, beating analysts’ estimates on trading revenue. It is the first major bank to repor
5 days ago