soleRebels – a global footwear brand with roots in Ethiopia makes shoes from used tires. The only WTFO certified fair trade footwear company, is highlighting the artisanship and business acumen of the people of Ethiopia. 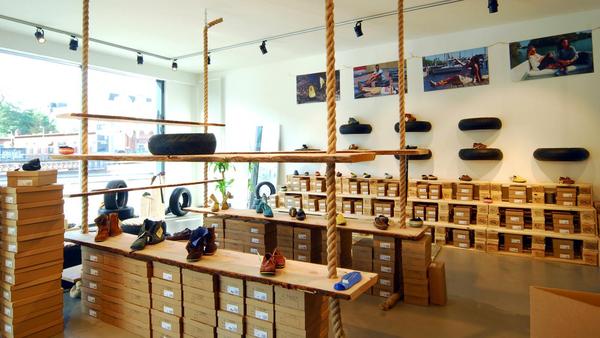 soleRebels’ showroom at Westfield Valley Fair Mall in San Jose, California, is an upbeat shoe showroom. The walls are lined with shelves stacked with stylish shoes, the lights glimmer and accentuate every corner, and happy customers walk around stealing glances of their feet in wall mirrors. It’s exactly how you’d expect a show showroom to be, expect the shoes are made from recycled tires and by local artisans of Ethiopia. soleRebels – a footwear brand from Africa is the first African company to open stand-alone retail stores across the globe, and the only WTFO fair trade certified footwear company. Born in 2005 in Addis Ababa, Ethiopia, soleRebels has grown into a global brand with year-over-year revenue in millions.  The company now has stores in the US, Greece, Switzerland, and Austria, among others 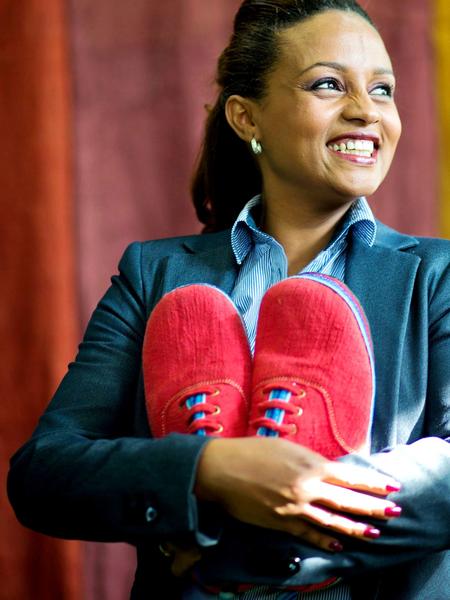 Its Martian-like landscapes, coffee production, and the Nile River – Ethiopia is known for many things.  The widespread poverty and unemployment is also often the subject of public discussions. In 2005, concerned about the chronic unemployment in her small and impoverished community of Zenabwork in Addis Ababa, an entrepreneur started a venture that used the local artisanship of the community to make shoes. Bethlehem Tilahum Alemu started soleRebels shortly after graduating from college. She wanted to do something for her community living in extreme squalor without exploiting local craftsmanship or the environment – hence, shoes from used tires. The artisans working for the company earn wages that are three time the industry average and four times the legal minimum wage in Ethipia. Alemu has achieved that by giving workers a safe space to work and develop – the company offers medical coverage for its employees and their families as well as offer transportation to and from work.

The blend of tradition and modern design

The thought behind this footwear brand from Africa also has an historic connection. The design draws inspiration from the traditional Selate and Barbasso shoes made from tires and worn by Ethiopian fighters who fought Italian forces wanting to colonize Ethiopia.

While the company maintains this historic connection, it also incorporates design elements that make its shoes competitive on the international platform. Shoes, sandals, slip-ons, and winter boots – the extensive range is at par with any other internal footwear brand. soleRebels Africa keeps the traditional methods of shoe-making alive by using handspun organic cotton and hand loomed fabric produced by local artisans.

But the company is also not devoid of modern amenities. “The walk naked kiosks” concept lets customers customize shoes at a SoleRebels’ store in real time. Alemu’s ambition for her company, along with offering gainful employment to the local community was to build a global brand that represents the entrepreneurial skills and craftsmanship of the Ethiopian people while opening channels for self-reliance and sustainable development. Since its inception in 2005, this African footwear brand has centered on eco-sensibility on every stage of the manufacturing process. Along with using recycled tires as one of their main materials, soleRebels maintains an almost carbon-footprint by using hand-spun fabrics from loca hemp and koba.

As the company spreads its branches in more countries and cities, Alemu has avoided outsourcing manufacturing. soleRebels is built on local skills and resources and is a living proof that with the right leadership, African firms can shield themselves from exploitation and find a way out of the vicious circle of foreign debt and poverty.

Christy Gren
Christy Gren is an Industry Specialist Reporter at Industry Leaders Magazine she enjoys writing about Unicorns, Silicon Valley, Startups, Business Leaders and Innovators. Her articles provide an insight about the Power Players in the field of Technology, Auto, Manufacturing, and F&B.
« Why lithium battery makers struggle in prolific Chile
Most Influential Industry Leaders in Healthcare of 2019 »
Leave a Comment
Close