You’re living in the Future if Websites can Design Themselves 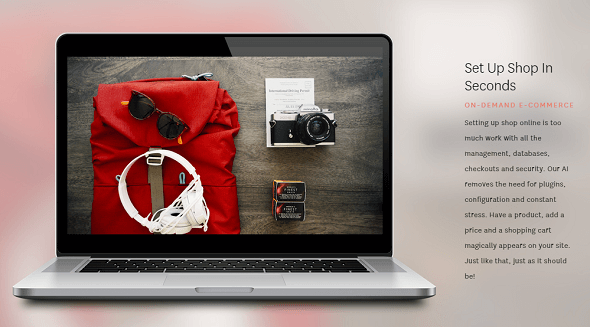 The Grid calls itself “AI websites that design themselves”.

The thesaurus really needs to consider adding one expression – ‘building a website’ equals ‘a labyrinthine task’ to keep a track of our emotions and millions of tears that were shed by amateur site owners. The world of web development now looks a little grim, doesn’t it? The good side of this torturous territory is that opportunists have transformed it into a profitable industry which is still in its infancy. Not convinced? Simply look at the success savored by WordPress and Squarespace. However, with all those layouts and customization options available at such sites, people are left with an infinite bundle of decisions that need to be made, say for example, does the page require a slider in the header or on the right hand side? Even if those decisions are made in a blink of an eye, there are still post-decision tasks involved, such as testing if those design combinations are feasible or not.

Imagine a scenario in which rather your site utilized machine learning to build itself, using data it was accumulating about how it was being utilized.

That is the thing with ‘The Grid’ – introduced to make revolutionary changes in the world of web development. After you include various forms of content, for example, pictures, text, and videos, things that are basically necessary to grab visitor’s attention, your job to design anything else left is virtually null. 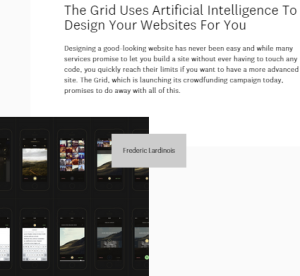 While its crowdfunding campaign has now officially launched, the first accounts are speculated to be released in 2015.

The Grid founder and CEO Dan Tocchini in a cosy chat with Fast Co.Labs explained that the core motive behind such an ingenious creation is the desire to make user experience more fun. They were basically looking for a fun factor, which would prompt users to simply focus on the content – pictures, text, videos and the rest.

The Grid calls itself “AI websites that design themselves”. However, what they unerringly mean is through that a great deal of confused specialized work, Tocchini is trying to completely mollify the basic issues with web design for an amateur.

Basically, when you make a website with The Grid asks you to characterize an objective for the content, whether that’s for gaining a bunch of new followers, viral clicks, crowfunding, or a scoop of other lucrative choices. The format/layout will adjust and change according to those objectives. Users can create anything! Right from something personal like fancy tales of their awkward selves to something commercial like mini virtual storefronts to sell items. The Grid works its way around making features available according to the need of the purpose.

Colors are singled out of images that you upload, algorithmically ordered in a sophisticated pattern and matched together. Shapes are included around specific types of content and images are edited flawlessly. In fact, you wouldn’t have to toil away to make sure that nobody’s face from the pages goes missing. A trademark feature that Tocchini is amped up for obvious reasons. The Grid has this inherent ability to recognize faces and keep them visible regardless of how the picture is resized.

The groundwork for The Grid originates from Grid Style Sheets (GSS) which is another creation by Tocchini. GSS is a reimagining of Cascading Style Sheets (CSS) which additionally replaces a browser’s layout engine with one that uses the Cassowary constraint solver.

GSS is an open source project which has been getting a decent measure of solo traffic and recognition as of late. The portrayal from the product page describes further that, “GSS is a CSS preprocessor & JS runtime that harnesses Cassowary.js, the JS port of the same constraint solving algorithm Apple uses in Cocoa Autolayout for iOS & OS X.” 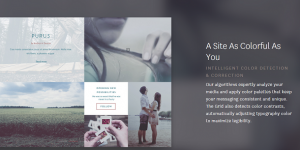 The groundwork for The Grid originates from Grid Style Sheets (GSS) which is another creation by Tocchini.

The basics of it are based around constrained programming, which lets web developers define what needs to be done, and afterwards depend on a mathematical solver to figure out how to really execute it. The Grid utilized this technology as its foundation stone to enable performing design tasks autonomously. Fun fact: last line also gives away a hint at where the name originates form.

We haven’t even embarked a journey into the machine age where optimum self-designing websites exist. We might though, in the very near future.

The Grid is currently working a great deal around tinkering codes that would let it be available for public use without any flaws. Currently there’s several issues that needs to be addressed.

When colors aren’t complimenting each other or the layout looks bizarre, the Grid’s creative director, Leigh Taylor, takes a hand to correct it. Taylor was at one time working with Ev Williams’ Obvious Corporation and designed Medium’s celebrated post editor. In a one-to-one with Fast Co.Labs she revealed how designers at the revolutionary firm are in loop with the AI. They interact with it, direct it, and influence it in order to give a direction to the system of design that enables multiple users do something that is practical beyond their ability. The Grid provides powerful AI tools that eliminate insignificant, iterative production errands that we have so easily inured to in daily life. The Grid provides a guide to solve issues, a blueprint for design interaction and the basic framework necessary for creating a brand and a proper presentation.

The Grid’s own site is a tailor-made example of what will be likely in the nearing months as it enthusiastically launches to the general public through a crowdfunding campaign. The site is loaded with eye-catching facets that have a fine-drawn rhythm as it scrolls. To perform this, the team simply tossed Markdown files [text] and images, while the algorithms did the rest of the dirty work.

The Grid, based in San Francisco was founded in 2011 by a team of web developers. It’s seed funding partners include former Facebook Vice President of Product Greg Badros, former President of Disney Interactive John Pleasants and founder of Elegant Themes Nick Roach. While its crowdfunding campaign is now officially launched, the first accounts are expected to be released in 2015.

One popular and controversial measure adopted by companies and countries to bring down the carbon levels in the atmosphere is the carbon offset method.
4 days ago

The money-spinning parent company of Google is now a tech conglomerate with a $1.8 trillion market capitalization. Here’s a complete list of companies owned by Alphabet, Inc.
4 days ago