Yale blow-molds the perfect marriage of Steel and Plastic 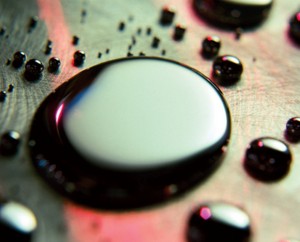 Strong as steel, yet as moldable as plastic ?? Sounds bizarre, but every material scientists’ dream seems to be coming true!

In a development that can potentially impact society as extensively as the development of synthetic plastics did over the last century, scientists at Yale have created a material that boasts the look, strength and durability of metal and can be molded into complex shapes as simply and cheaply as plastic.

This new material, developed by the team of scientists at Yale led by Jan Schroers, has already been practically tested at a number of levels through the creation of complex shapes, such as metallic bottles, watch cases, miniature resonators and biomedical implants, resulting in products that are twice as strong as typical steel and can be molded in less than a minute.

The crystalline structure found in ordinary metals that makes them strong also results in them requiring three separate steps for processing (shaping, joining and finishing). In contrast, these new alternate metal alloys recently developed by the Yale team are amorphous metals known as bulk metallic glasses (BMGs), with randomly arranged atoms and low critical cooling rates that allow them to be blow-molded into complex shapes like plastics.

This allows the researchers to combine the three traditional time- and energy-intensive metal processing steps into one blow molding process that takes less than a minute.

The Beauty of Bulk Metallic Glasses

Although the different metals used to make the alloys, such as zirconium, nickel, titanium and copper, cost about the same as high-end steel, they can be processed as cheaply as plastic, according to Schroers.

The BMGs ability to soften and flow as easily as plastic at low temperatures and low pressures, without crystallizing like regular metal is what allows the material to be shaped with unprecedented ease, versatility and precision, Schroers said. The BMGs were shaped in a vacuum or in fluid to ensure the ideal temperature for blow molding was maintained.

“The trick is to avoid friction typically present in other forming techniques,” Schroers said. “Blow molding completely eliminates friction, allowing us to create any number of complicated shapes, down to the nanoscale.”

Schroers and his team have already fabricated a wide variety of shapes and devices using the new processing technique, including miniature resonators for micro-electromechanical systems (MEMs) and gyroscopes, and they say that is just the beginning.

“This could enable a whole new paradigm for shaping metals,” Schroers said. “The superior properties of BMGs relative to plastics and typical metals, combined with the ease, economy and precision of blow molding, have the potential to impact society just as much as the development of synthetic plastics and their associated processing methods have in the last century.”