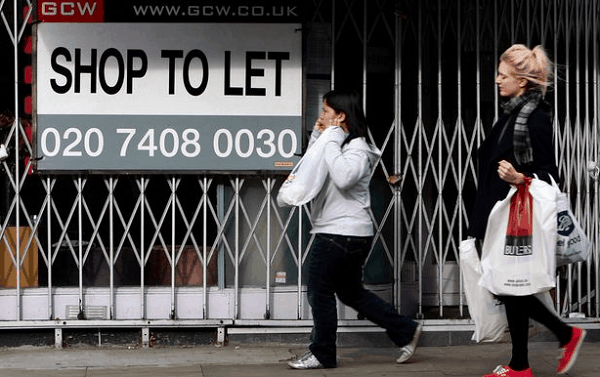 The newest data  shows data published by the British Retail Consortium (BRC) that 1 in 10 shops in the UK high streets and shopping centers were empty in the month of October. Wraiths of empty stores haunt the UK high streets as retailers face stagnating sales and growing costs as well. The survey released on the 19th of November indicates that the situation is to deteriorate.

The latest BRC survey showed that the proportion of empty stores in UK high streets and shopping centers was approximately 11.3 percent in the month of October and it is the worst result since the British Retail Consortium decided to publish its surveys in July 2011. The figure was up roughly 0.4 percent from the previous months.

According to the latest BRC survey, three regions including Northern Ireland, Wales as well as the north part of the UK saw the highest vacancy rates. Approximately 20.0 percent stores units were empty in Northern Ireland in the period, while the rate for Wales was roughly 15.1 percent and the North & Yorkshire region saw a 14.6 percent vacancy rate. According to findings of the latest BRC survey, the rate of 7.6 percent was recorded in Greater London.

The Office for National Statistics published in November its data, underlying that UK retailers saw a decrease in sales of roughly 0.8 percent in the month of October. At the same time the UK annual inflation rate grew to as much as 2.7 percent. Therefore Britons’ incomes were being further squeezed as food prices increased as well. Analysts believe that data, which was published on the 15th of November, showing cuts in food and clothing purchases indicates that the UK economy will not likely increase in the last quarter of the year.

Stephen Robertson, the Director General of the British Retail Consortium, underlined: “This new high in empty shop numbers really sets alarm bells ringing,” adding that the latest BRC data “confirms that financial challenges for both customers and retailers are far from over.”

Since the beginning of 2012 the UK has seen high profile retail failures, including big brands such as JJB Sports, Clinton Cards, Black Leisure and Peacocks. All of them either disappeared or reemerged in some form after scaling back their presence. Yet hundred of shops have shut down.

But the next failure is likely to be witness in November as electricals chain Comment is expected to collapse. Comet has recently informed that as many as 41 of nearly 240 outlets are to be closed by the end of November.

Analysts are convinced that if the government of the UK wants to bring back life to the high streets and shopping centers as well as guarantee the role of the UK retail industry when it comes to the creation of new posts, rates in 2013 need to be frozen. However analysts underline that the 2012 holiday shopping season is likely to see a number of temporary stores opened, which might have a positive effect on the UK vacancy rates. In addition, landlords are expected to have a more flexible approach as they want to rent their empty shops in the UK high streets and shopping centers as well.

Anna Domanska
Anna Domanska is an Industry Leaders Magazine author possessing wide-range of knowledge for Business News. She is an avid reader and writer of Business and CEO Magazines and a rigorous follower of Business Leaders.
« Shares of HTC jump after the settlement of patent issues with Apple
Intel CEO Otellini to retire as company faces new challenges »
Leave a Comment
Close