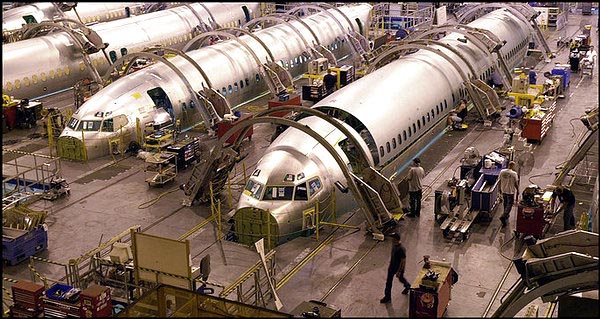 Boeing, the aerospace industry leader, announced Wednesday, that it would move out of Wichita and completely shut its plant in Kansas by the end of 2013 as military assignments dry up in the midst of U.S. spending constraints. This would surely affect the aerospace industry in Wichita. Back in February the city and state leaders held a grand celebration. And after Boeing officials and Kansas leaders put in a lot of hard work, Boeing was awarded with a tanker contract worth $35 billion. Now, Eleven months later, on Wednesday, the mood significantly changed.

Boeing said that it would shut its expansive military airplane plant in Wichita, Kansas, over the next two years and lay off several of its 2,160 workers. Boeing also announced that it had plans to shift about 1,400 jobs to the Seattle area, San Antonio or Oklahoma City, either by transferring workers from Wichita or hiring others. Boeing, the aerospace industry giant, clearly declared that it except for the 1,400 jobs that would be shifted, the rest were planned to be eliminated.

Chicago-based Boeing said. “Over the past five years, contracts in Wichita have matured, programs have come to a close or are winding down, and the site does not have enough sustainable business on the horizon to create an affordable cost structure to maintain and win new business,” as reported in a business magazine.

Boeing has blamed this unforeseen move on the maturing of government defense contracts and the winding down of programs. Mark Bass, vice president for maintenance, modification and upgrades for Boeing Defense, Space & Security said, “In this time of defense budget reductions, as well as shifting customer priorities, Boeing has decided to close its operations in Wichita to reduce costs, increase efficiencies and drive competitiveness. We will begin program transitions in the coming months, with the complete closure of the site scheduled for the end of 2013.”

Mark Bass said that there were plans of adding about 800 jobs in Oklahoma City, 300 to 400 in San Antonio and a 100 in the Seattle area, filling the positions through both transfers and local hires. Boeing has also decided on installing the military systems on the tankers near the assembly line, in Everett, Wash., where the airframes will be built, instead of in Wichita.

The Senator Jerry Moran, Republican of Kansas expressed his outrage on the recent development. Jerry Moran said, “I don’t understand how Boeing can renege on those words and I certainly don’t know what’s changed in the last few months to cause them to say one thing then and reach a different conclusion now.”

There would be a discussion held by The Defense Secretary Leon E. Panetta over viewing the war strategies and weapons programs Pentagon has to save at least $450 billion over the next 10 years. But the question that haunts the officials is ‘whether this move would hold any effect on the aerospace industry in Kansas? Kansas officials are calling it a promise which seems to have been broken. Boeing has promised an addition of 7,500 jobs and $400M in revenue for Kansas, which is now a lost reality.

The financial crisis has led to a severe downturn in the jet market business spreading depression across the city and possibly a reason that forced Boeing take a severe step. But Wichita is still a center of manufacturing for business jets and small private airplanes, built by Bombardier, Hawker Beechcraft and Cessna, and will remain. It is known for the aerospace industry manufacturing business.

And this will make Wichita continue to be important to Boeing. Boeing said 24 Kansas companies will still be suppliers on the Air Force tanker program. However, Boeing’s statement that it “values its long-term partnership with Kansas, and we will continue to work in support of a robust aerospace industry in the state” will not soothe its employees after its plan to move out of Kansas that still calls itself the “Air Capital of the World.”