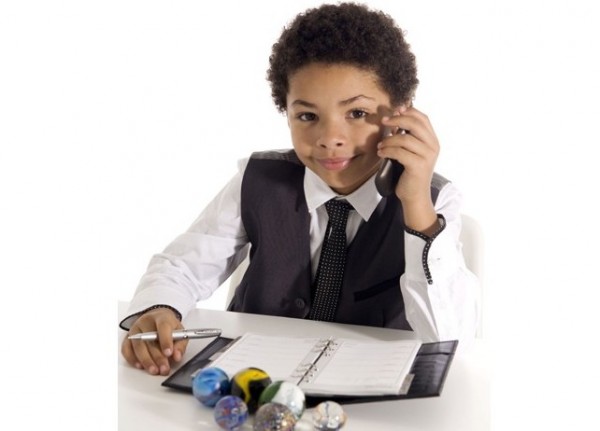 We love the kids, don’t we? But Harli Jordean, the 8 year old kid, soon to be 9, is just too cute. Harli Jordean was born in Stoke Newington, London in spring 2003. And he is definitely not your average eight year old.  When his friends are busy playing computer games, he is engaged in buying stock, liaising with suppliers and handling orders for his internet marble empire, Marble King. This tiny little lad is not only absolutely adorable, but also a potential businessman.

Nearly for the past two years, petite Harli Jordean has been selling marbles. Marble King, Harli Jordean’s successful marble company, sells everything that is marble-related, from affordable tubs of the glass playthings to significantly pricier items like Duke of York solitaire tables. And what’s great about this is that the mini CEO himself sources purchases and processes these items.

London’s tiny tycoon has been running the blooming, prosperous and successful marbleking.co.uk website for two years, selling anything from tubs of marbles to £599 limited edition Duke of York solitaire tables. Marble King is now turning over thousands of pounds each year – with orders flooding in from as far away as America.

Harli Jordean’s marble company has a long story behind its evolution. After losing his marbles to an older boy, Harli and his mom Tina turned to the Internet to find replacements for ordering more marbles. Yes, he literally ‘lost his marbles.’ And after they struggled to find anywhere dedicated to selling Harli’s favorite toy, he begged his mum, Tina, to let him start his own site, Marble King, selling marbles. And at just eight he started a successful marble company. Harli has always been mad about marbles. Infact, the 8 year old started the business two years ago after becoming frustrated with the lack of marble choice for his own collection.

Harli became so busy that he even had to employ his mom and two older brothers to help him cope with the sheer demand for products on his website. The world’s youngest CEO now has his mom and brothers in his management team, helping him meet the growing demand since his company, Marble Kings is earning profits now in the thousands. Within months of launching, Tina was shocked to see orders flooding in – with Harli handling them all on his own.

Harli Jordean’s dream is to have a chain of stores like Hamleys. He dreams of making his store one of the biggest toy stores in the world selling all sorts of marbles. Harli’s friend love that he has his own business. Harli said, “At first some of them didn’t believe me – but they do now. They are some of my best customers”.

Harli’s mom Tina said, “Harli has been obsessed with marbles ever since he was six. He used to sleep with them under his pillow. The last thing he talks about before going to bed is marbles and they are the first things he mentions in the morning”.

Harli’s obsession became so big that his family started calling him the Marble King. So when he wanted to set up a website it was the natural name for it. Harli’s mom thinks that this would indeed be a good way to teach Harli some great life skills and show him responsibility. Tina never thought Harli’s marble company, Marble King, would become so popular that they would actually have to struggle to cope with the number of orders at times.

Tina says Harli now wants to mass-produce his own branded marbles in China – before selling them the world over in his own shops. Tina believes that as a boss he is very amenable and has his own ideas of how to do things. Harli is fiercely ambitious and is very determined and outgoing. But sometimes his ideas are so majestic that his mom and elder brothers have to resize them to make it a reality. Well, his dream is still to own Britain’s biggest marble shop and open stores around the world. At the minute Harli is pestering his mom about creating his own Marble King marbles, so that could well be the next step for him.

Harli’s first business, the Marble King (UK) company is now turning over thousands of pounds and demand for products is extremely high from the UK and many countries of the world, such as Brazil, Mexico, Tawain, Poland, Greece, Italy, France to mention just a few…most kids just love marbles!

Harli said, “My future looks bright at present and I feel it is just the beginning and first of what I hope to be many business ventures and adventures that I will be embarking on along the way, after all time on my side…I’m going to turn just nine”.