Created by a team of Ex-Apple employees, CENTR is the world’s smallest panoramic camera giving you a high-definition video experience. 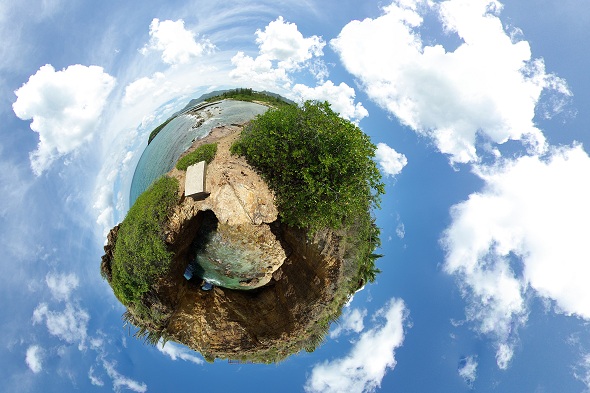 Following the footsteps of ex-iDevice TL Tony Fadell who created Nest Thermostat, is no another genius exiting straight from the Apple lab, Bill Banta to lead a start-up called CENTR Camera (Bill Banta was in charge of getting camera into devices such as iDevices and Macbooks).

How Does It Work?

CENTR features an aesthetically pleasing body (resembles a donut!) that can fit in the palm of your hand and can even let you control via tablet or a smartphone (iOS and Android) using Bluetooth LE to link the devices.

The Panoramic camera features four outward-facing HD 5MP image sensors inside the body. The device uses footage from the four cameras and then integrates it together. There are also three microphones in order to record the audio. CENTRcam has

CENTR cam can record panoramic HD videos of 4k resolution, for up to 2hrs or shoot 5hrs of 20MP time-lapse panoramic photographs. It has a standby battery life of 6hrs. The battery pack is made up of curved LiPo batteries which has been used to work with its unique body and can be easily swapped out.

The company noted on Kickstarter that 360-degree camera is based on heavy-duty military cameras developed by the company. It says that cameras with such unique capabilities easily cost over a $1,000 and require a separate image stitching software. However, the CENTRcam does it all through its unique in-built software to align images.

Through the Kickstarter campaign, the start-up is hoping to raise up to $900K which will help them cover expenses and launch the product swiftly into the market. The camera is set to undergo mass production by 2015, and will cost around $399, however for Kickstarter investor it will cost $299.

Hyundai Motor says the vehicle recalls are expected to cost the company about 1 trillion won or an estimated $900 million. In South Korea, 2...
10 hours ago