French Company, Parrot popular maker of flying drones, demonstrated its latest Bepop drone, a ‘flying camera’, which is an upgrade from its popular AR Drones. 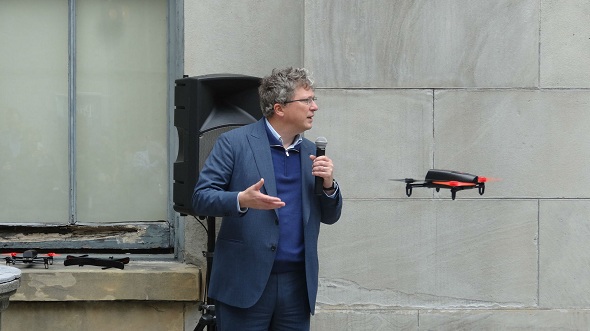 This latest drone which was showed off at Old Mint, in downtown San Francisco for a special press event in Thursday, is designed for indoor and outdoor use. Parrot is also introducing an accompanying Wi-Fi skycontroller (remote control) which can extend Bepop Drone’s range to up to 1.2 miles. From the demonstration, it is pretty much clear that the latest Bepop Drone can be used as a personal aerial surveillance system. 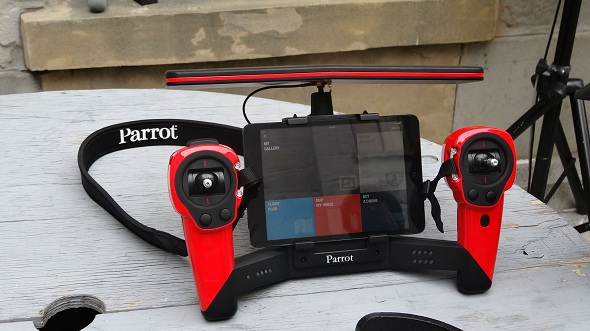 The Bepop drone is infused with a 14 MP camera, a built-in GPS, four ceramic antennas and boosters (802.11ac connectivity), a selection of image-stabilizing sensors and Oculus Rift compatibility. The fisheye lens, allows 180-degree field of vision, with the software capturing video. 3-axis digital image stabilization provides a deviation free view when the drone is in motion. The captured video (stored on-board in an 8GN hard drive) can be viewed in a smartphone or a tablet (Android and iOS – FreeFlight3.0 app ) both of which can be used to control the drone. The videos can also be uploaded on the company’s cloud service locker, Sky Academy. Its 120mAh Lithium-ion battery can provide 12 minutes of airtime per 2.5 hour charge. 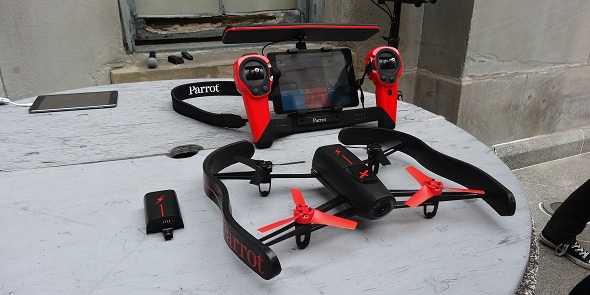 Bepop has Styrofoam bumpers attached to each side of the drone in order to prevent damage caused with the drone running into walls and other surfaces. While the 3-axis sensors (inclusive of accelerometer, gyroscope and magnetometer) make the drone controlling experience much easier even in the harshest windy conditions.

Using Oculus Rift, virtual reality handset and connecting it with the Skycontroller and the drone’s camera, the experience can get ten times more fascinating. The Oculus can plug into the Skycontroller through an HDMI connection and pilots can use the oculus rift headset to control the position of the camera.

The drone maker has concentrated on making the whole experience real through video quality and stability through the three sensors. The drone also comes with packs of GNSs chipsets that use GLONASS and GALIELO data other than GPS for autonomous flight and return to take-off position.

Parrot will release Bepop drone in the fourth quarter and will be available both with and without the Skycontroller. The company hasn’t announced its price and exact date of launch yet, but stated that Bepop drone will cost a little more than Parrot AR Drone 2.0 $300 and the Phantom models which os around $1,000.

Anna Domanska
Anna Domanska is an Industry Leaders Magazine author possessing wide-range of knowledge for Business News. She is an avid reader and writer of Business and CEO Magazines and a rigorous follower of Business Leaders.
« The World’s Most Advanced Supercar is here! Undeniably a Masterpiece the BMW i8 Hybrid Supercar comes straight from the future!
Wolfgang Artists Team Set to Beat Architects for the UK Pavilion 2015 Milan World Expo »
Leave a Comment
Close