CO2 is a colorless gas with a sour taste and a mild pungent odor. It is one of the most important greenhouse gasses linked to global warming. Still, it is a minor component of the Earth’s atmosphere (about three volumes in 10,000), formed in the combustion of carbon-containing materials, fermentation, and animal respiration, and used by plants in carbohydrate photosynthesis. The greenhouse effect is caused by CO2 emission in the atmosphere, which prevents some of the radiant energy absorbed by Earth from returning to space.

One of the few methods of removing CO2 emissions is Direct Air Capture. Direct Air Capture (DAC) is a method of capturing carbon dioxide (CO2) directly from the atmosphere (rather than from point sources like a cement factory or a biomass power plant) and producing a concentrated stream of CO2 for sequestration, utilization, or the production of carbon-neutral fuel and winds. When ambient air comes in contact with chemical media, such as an aqueous alkaline solution or sorbents, carbon dioxide is removed. 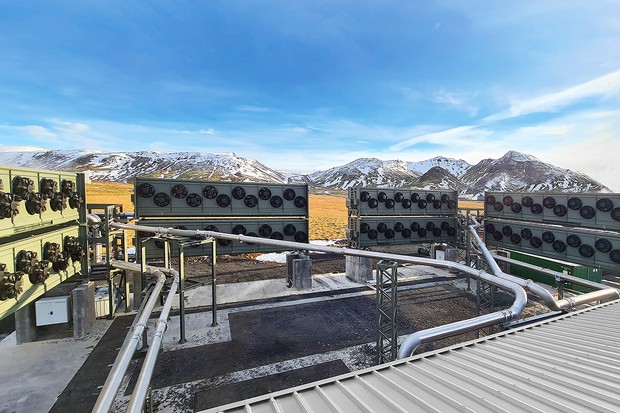 The world is still fighting with CO2 emissions. Let’s try another way to remove carbon from Earth. (Image Crdit: Climeworks)

A carbon-capturing plant is a machine used for lowering carbon emissions, and its sole aim is to assist in the fight against global warming. It’s a three-step procedure machine that involves trapping carbon dioxide produced by power plants or industrial processes like steel or cement production, transferring it, and then burying it deep underground.

The facility draws in the air with dozens of enormous fans before filtering it. The CO2 trapped in the filter is subsequently expelled via heat. The CO2 collected is combined with water and injected into the ground, where it gradually transforms into rock; these systems are powered by a geothermal plant from a local power station, which is renewable.

According to the International Energy Agency, there are currently 19 direct air capture plants operating throughout the world, trapping more than 9,000 tonnes of CO2 emissions each year. However, the world’s largest natural air capture plant is now located in Iceland; Iceland is a North Atlantic Ocean island republic in the Nordic region. The newly-opened facility, which Climeworks of Zurich built, is expected to trap roughly 4,000 tonnes of carbon dioxide per year. That is the equivalent of around 790 automobiles’ annual emissions.

The Orca carbon capture plant is a facility that removes carbon dioxide from the environment using direct air capture. Climeworks built it in collaboration with Carbfix, university-industry cooperation that has created a unique CO2 capture method.

The Orca plant’s collectors are eight shipping container-sized boxes. Slats, similar to enormous Venetian blinds, run across the front of each box. There are 12 fans on the back of the box that pulls air through it. CO2 molecules hit the surface of a specially created filter material within the collectors, where chemicals called amines preferentially hold onto them.

It’s a fantastic moment when you make contact. The rest of the air passes through the collectors, but the carbon remains stuck to the amines. CO2 transitions from the chaotic chaos of the atmosphere to the orderly grip of humanity at that point, with the ability to stay under control for thousands of years. The CO2 is released from the amines when heat is applied, and it is then injected into surrounding volcanic rocks, where it forms long-lasting carbonate minerals.

The Orca Facility in Iceland is the world’s largest carbon-capture plant, sucking CO2 directly from the atmosphere and converting it to stones. Climeworks’ Climate Pioneers can mitigate the effects of climate change because of Orca, the world’s largest direct air capture facility. The geothermal Plant provides the heat and power needed to run the natural air capture operation.