The UK is pioneering a power generating technology that could prove a major breakthrough for global power markets with the world’s first liquid air energy storage (LAES) plant.

The 5MW/15MWh LAES plant which is located at Bury, new Manchester, UK, was developed by Highview Power in collaboration with recycling and renewable energy company Viridor as the world’s first grid-scale of liquid air energy storage plant to demonstrate the technology.

Highview Power CEO Gareth Brett said the non-polluting power plant is unarguably a major rival for other storage technologies and a lot cheaper than batteries at large scale. LAES has the potential to deliver power for up to 40 years which is by far better than battery technologies. And the system can be installed anywhere in the world.

How does LAES work?

LAES works by cooling air to -196oC [Cryogenic cooling], which changes its state to a liquid that can be stored in high-pressure tanks at low pressure. The stored liquid is pumped and heated when power is needed. The heated liquid air produces high-pressure gas that can drive turbines to create electricity. 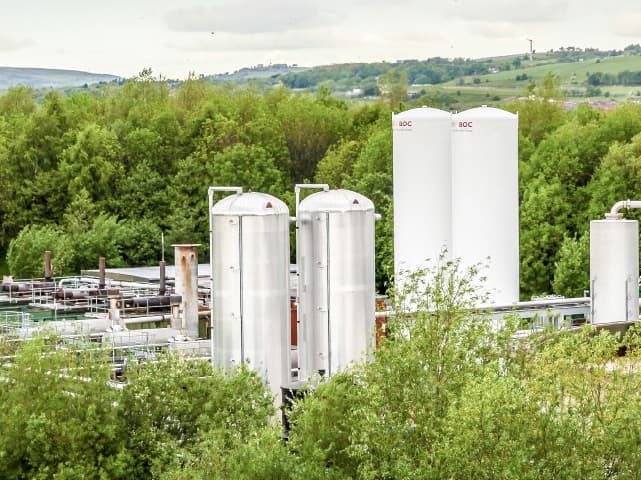 LAES has the potential to deliver power for up to 40 years which is by far better than battery technologies.

About 5,000 average-sized homes can be powered for approximately three hours by the Highview plant which has a capacity of 5MW and 15MWh electricity storage capacity. Commercial-scale plants would be designed to have a capacity from around 50MW.

Brett said LAES technology can be built to scale to hundreds of megawatts following the capacity required to power urban areas, small towns and large cities. Meaning that LAES plants could easily power a town like Bury which has approximately a hundred thousand homes for many days, not hours, using energy stored from clean electricity sources like a local windfarm.

“The plant is the only large-scale, true long-duration, locatable energy storage technology available today, at acceptable cost,” said Brett. “The adoption of LAES technology is now underway, and discussions are progressing with utilities around the world who see the opportunity for LAES to support the transition to a low-carbon world.”

LAES technology is crucial to the rapid growth in renewable energy

The UK generated up to 29% of its electricity from renewable energy in 2017. This clean energy has been driven by the intermittency of the sun and wind energy; records peak energy in highs and low energy when both have low intensity. Pumped hydro storage and lithium-ion batteries are the most common forms of energy storage today, but the mounting importance of improving the energy storage capacity has forced wide investment in other technologies.

Italy Utility and Enel are some of the potential customers that have already shown interest in the LAES technology built by Highview. Head of energy storage innovation at Enel Green Power, Gianluca Gigliuci said storage technologies have become imperative to achieve satisfaction with renewables.

Anna Domanska
Anna Domanska is an Industry Leaders Magazine author possessing wide-range of knowledge for Business News. She is an avid reader and writer of Business and CEO Magazines and a rigorous follower of Business Leaders.
« Jet off to Bordeaux in the Most Expensive Private Jet
The Big, Bad List of Lawsuits Against Facebook »
Leave a Comment
Close