Airbus’ latest experimental small aircraft E-Fan powered completely by electricity has successfully taken to the skies for its maiden voyage in France. The environment friendly flight took off from an airport close to Bordeaux in south western France and its developers believe that their maiden flight could bring down the cost of air travel by a third. 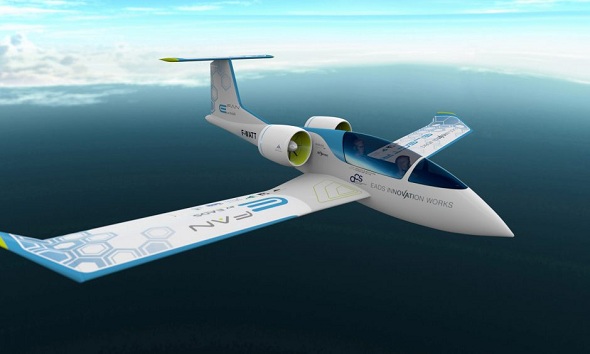 E-Fan is the latest creation of Toulouse-based Airbus, measures approximately 19 feet from nose to tail and makes a little more noise than a hair dryer. What makes stand apart is the fact that its engines are powered by electricity, affording it a quieter and greener profile paving the way for the technology’s potential introduction in other aircraft.

The flight can remain in the air for about 45-60 minutes, if its 120 250V Li-ion batteries are properly powered. The wings of the plane store the batteries and its backup batteries last for about 15 minutes.

The E-Fan is powered by 120 lithium-ion polymer batteries. Though the plane has the capacity to fly for nearly an hour before recharging, the plane’s maiden official flight last month lasted a little less than 10 minutes. According to Airbus, an hour-long commercial flight with the E-Fan could incur a cost of only US$16 per hour to power as opposed to the US$55 for a flight in a similar sizes petrol-powered plane but that’s a far cry from being useful in the commercial space. It can go up to a respectable 220km/h – with a cruising speed of 160km/h on its 30kW engines.

The electric E-Fan training aircraft is a highly innovative technology experimental demonstrator based on an all-composite construction, Airbus said on its website.

“The E-Fan project and Airbus Group’s commitment to the field of electric and hybrid research show our vision of future technological developments,” said Airbus Group chief technical officer Jean Botti. “It will not only lead to a further reduction in aircraft emissions and noise to support our environmental goals but will also lead to more economic and efficient aircraft technology in the long run,” he added.

Airbus intends to manufacture two new versions of the E-Fan. The double-seater E-Fan 2.0 will be   for electric training aircraft purpose, while E-Fan 4.0 will be used for both training and general flight purposes and will be powered by a hybrid system.

Airbus Group and its partners are planning to undergo research and development to create a series version of the E-Fan and propose an industrial plan for a manufacturing facility that is close to Bordeaux Airport, Airbus said. The company is also hopeful that it can not only reduce costs, but can actually cut down carbon emissions for all new aircraft by 75 percent.

Currently the plane looks like a stunt aircraft, however in the course of its development, Airbus hopes that the plane can be transformed into a highly advanced technology like nuclear-powered planes.

Anna Domanska
Anna Domanska is an Industry Leaders Magazine author possessing wide-range of knowledge for Business News. She is an avid reader and writer of Business and CEO Magazines and a rigorous follower of Business Leaders.
« Facebook Smartphone Patent Revealed: Touchpad on the Side & Lots More!
In Minnesota, smartphone theft is now a thing of the past »
Leave a Comment
Close