In a world first, a 3D printed car took its first spin during the weekend after being created live in front of spectators at the International Manufacturing Technology Show in Chicago.

Phoenix, Arizona-based automotive company Local Motors managed to 3D print and assemble an entire automobile called the ‘Strati’ which was unveiled at IMTS held from Sept. 8 through Sept. 13.

The car was designed by Local Motors and printed using a process called Broad Area Additive Manufacturing (BAAM) made by Association for Manufacturing Technology, Cincinnati Incorporated and the Oak Ridge National Laboratory.

Local Motors required just 45 hours to print the Strati. The two-seater electric car has a range of up to 120 miles and is able to run at a top speed of 40 miles per hour.

“We expect in the next couple of months [printing a complete car] to be below 24 hours and then eventually get it below 10 hours, [down from 45 hours currently]” said John Rogers, chief executive officer of Local Motors. “This is in a matter of months. Today, the best Detroit or Germany can do is 10 hours on a [production] line, after hundreds of years of progress.” 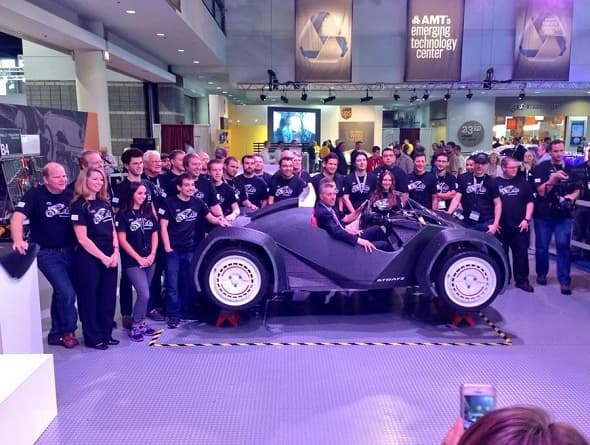 The 3D printed car is made from acrylonitrile butadiene styrene (ABS) plastic infused with carbon fiber materials. The BAAM is able to print at a rate of 40 pounds of reinforced plastic per hour, with the Strati printed and built in six just days while the Urbee 2 by Jim Kor took 2,500 print hours.

There are 40 3D printed parts in the Strati. Once the vehicle was printed, Local Motors said it outfitted the car with mechanical components such as motors, battery, wiring, and suspension, which were sourced from a variety of suppliers.

While other auto makers have built cars using 3D printing before, Local Motors believes it is the first company ever to attempt to print both the body and chassis components of a vehicle together using 3D printing.

The car’s design was chosen from over proposals submitted by Local Motors’ online community. It held a six-week challenge and received more than 200 entries from 30 different countries before choosing the Strati as the car’s final design. The winning design was submitted by Michele Anoe of Italy, which called for the Strati’s body to be 3D printed in one piece, which took nearly 44 hours to print.

According to Local Motors, manufacturing of the vehicle for the public could begin by 2015 with a possible initial retail price of between $US 18,000 up to $US 30,000.