3D printing is about to get a whole lot easier, inexpensive, and more user-friendly. The latest entrant to offer a 3-D printer to everyone is New Matter, a freshly launched startup co-founded by Idealab’s Bill Gross and Steve Schell. They kicked off a 35-day Indiegogo campaign for the MOD-t, a 3-D printer that will start from $149 to $249. That’s in line with the lowest-priced and the most affordable 3D printers ever. 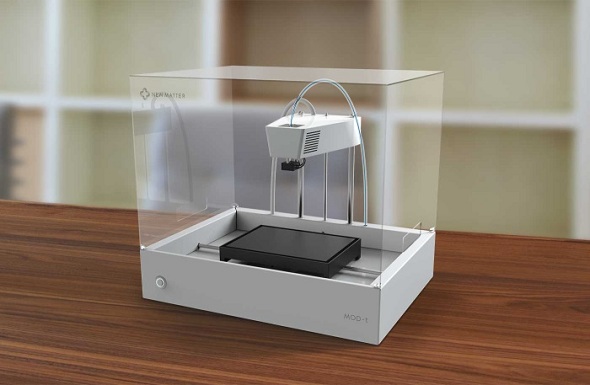 A very limited number of early backers will be able to nab it for an incredibly low price of $149 with another batch available at $199 for the next number of supporters. Once those printers are sold out, supporters can still pick the printer up at the price which it will retail at, an astonishingly low $249. In comparison, the cheapest printer from popular manufacturer MakerBot starts at $1,375. New Matter has already received operating funding from Idealab, First Round Capital, Alsop Louie, FrogVentures, Biotechonomy and angel investor Scott Banister. The startup is planning to raise nearly $375,000, all of which will fund fabrication. It intends to deliver the products to early customers in the first half of 2015. Steve Schell, Co-Founder and President of New Matter said they’ve reduced the price not by lowering the quality, but by improving engineering. MOD-t is comparatively a small 3D printer that comes with software and a store full of printable designs. They’ve devised a new type of two-axis motion system for the build plate, so it moves and builds at the same time. Hence it prints more uniformly and more cheaply than alternatives. There are certain limitations to the MOD-t; it only prints in polylactic acid at a definition of 200 microns and a four by six by five-inch build volume. Higher end desktop printer manufacturers like MakerBot can print at 100 microns, with larger sizes and multiple materials. 3-D printing’s grand plans include, simple production of intricate shapes, affordable replacement parts, new markets for designers and makers, and rapid prototyping that allows easy product refinement. However, the products are yet to catch on with the consumers. The hurdles till date have been the high cost of the printers and an ill-defined value scheme for household use. At the end of the campaign, New Matter plans to introduce an “Etsy-meets-iTunes ecosystem,” offering a range of 3D; customizable designs to help people get started. Certain designs will be offered for free and others for sale.

Anna Domanska
Anna Domanska is an Industry Leaders Magazine author possessing wide-range of knowledge for Business News. She is an avid reader and writer of Business and CEO Magazines and a rigorous follower of Business Leaders.
« Twitter Signs First Ever Mobile Ad Exchange Deal Worth $230 Million With Omnicom
Japanese Humanoid Industry is progressing faster than you may have thought »
Leave a Comment
Close