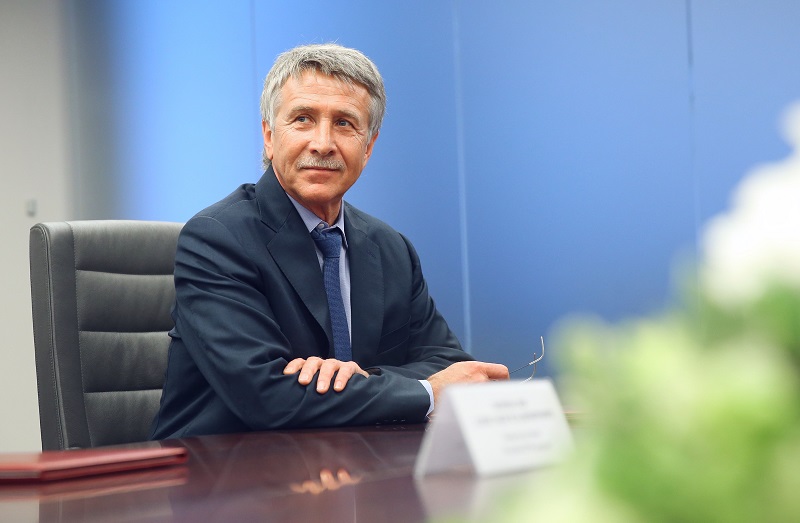 In spite of global economic turmoil, dipping oil prices, weakened rubles and Euros, it is still a pretty good year for Oil and Energy magnates overall. Exactly, how much are the world’s billionaire oil and energy moguls worth? According to the latest ranking, altogether it’s worth $226.5 billion.

Industry Leaders magazine brings to you a list world’s billionaire oil & energy tycoons. Nearly all of self-made billionaires, 7 made their own luck and 3 have inherited their fortunes. Russia has made a strong showing in the list, with 5 people hailing from that region. As American industrialist J. Paul Getty, one of the wealthiest man during this time said, “formula for success: rise early, work hard, strike oil.”

Here are the top ten in the order of wealth.

Even though oil prices fell and U.S. crude settled at a six-year low, the princely fortunes of America’s leading oil industry billionaires have shot up. At the top of the list are the billionaire fossil fuel magnate Koch brothers, Charles and David, each of whom has a net worth of nearly $43.1 billion.

Charles and David Koch (pronounced as Coke) lead Koch Industries Incorporated, America’s biggest privately held companies after Cargill. Based in Wichita, Kansas, Koch Industries is a conglomerate business with its reach extending from petroleum, chemicals, fiber, energy, minerals, finance, commodities trading, and other ventures and investments. Since its founding in 1940 as Wood River Oil and Refining Company and later as Koch Industries in 1968 in honor of their father, Fred Koch, the commodities Titan has grown 3,000-fold.

Charles Koch serves as the CEO of Koch Industries, and like his brother, owns 40% of the conglomerate. David Koch currently serves as the company’s Executive Vice President and co-owner. He is the fourth richest person in the U.S. and the wealthiest New York City resident. Koch Industries had revenue of $111.5 billion in 2014 and is the second largest

The Kochs are also active philanthropists, such that it has become synonymous with political spending, however, the family’s philanthropy has flowed to a wide range of causes. Koch Industries, Inc. actively support campaigns of biodiversity, land restoration, wildlife habitat enhancement, and conservation education. Moreover, Koch brothers philanthropic focus has also been politics, cultivating artists, cure diseases, school students, and clean the Earth.

Mukesh Ambani, is managing director and chairman of Reliance Industries, India’s biggest private sector enterprise. It is also one of the world’s biggest private sector conglomerates, and India’s second most valuable company. He is the elder son of the late Dhirubhai Ambani. Reliance Industries Limited Deals mainly in Refining, oil and gas sectors, and Petrochemicals. Reliance Retail Ltd, another subsidiary is the largest retailer in India.

He joined the company in 1981. He established Reliance Infocomm Limited, one of the world’s largest information and communications technology initiatives. Under his direction, the world’s largest grassroots, petroleum refinery at Jamnagar in Gujarat was created.

In 2010 he founded one of the biggest private foundations in India, Reliance Foundation, a philanthropic foundation initiative by Reliance Industries Limited, which aims to promote sustainable growth and revolves around various issues in India like Rural transformation, Education, Health, Urban Renewal, and Arts, Culture and Heritage. It also works with other NGOs and philanthropies for collaborative works.

Li Hejun, is chairman and CEO of Chinese multinational company Hanergy, founded in 1994. A renewable energy company, it is active in clean energies like wind, hydropower and solar generation. Li Hejun holds a total stake of 80.79% in Hanergy Thin Film Power Group Limited. The other subsidiaries of the company are Miasolé, Solibro, Alta Devices and Global Solar Energy.
Recently he invested in Mobile energy with a vision of aligning it with ideas where human beings will be able to directly harness sun’s energy. With cutting-edge and salient features such as light weight, flexibility, low light performance, and diversified shapes and colors, thin-film solar technology can be widely applied to a variety of fields such as mobile 3C products, wearable devices, distributed power generation, fully solar-powered automobiles, satellite and solar-powered unmanned aerial vehicles.

It is based on integration with technologies including, mobile Internet, controlled data tracking to make highly-efficient, energy storage and steady mobile energy supply a reality for all. It is also based on distributed power generation technology.

The richest man in Britain is a Ukrainian businessman who spends his time between London and New York and has truly lived the American dream.

Often referred to as the 21st century Gatsby, Blavatnik migrated to the U.S. in 1978, earning degrees from Columbia University and Harvard Business School, before setting out opportune investments in post-Soviet aluminum and energy companies. After selling his stake in TNK-BP to Rosnett for $7 billion in 2012, he made audacious acquisition of Warner Music, along with large investments in Deezer, Spotify, and Beats Electronics.

In 2010, he pledged $117 million to Oxford University to build the Blavatnik School of Government. In 2013, he committed $30 million to establish the Blavatnik Awards for Young Scientists at the New York Academy of Sciences. A passionate art collector, he recently paid $14 million for Wolly Mammoth by Damien Hirst at a charity auction during the 2014 Cannes Film Festival.

The second richest person in Russian, Mikhail Fridman is the head of Alfa Group, with an estimated net worth $14.6 billion.The Jewish businessman started his career in trading & financial services, before founding Alfa Group Consortium in 1989, which is now one of Russian’s largest   privately held investment company.

A few years ago, this Moscow-based, Ukrainian-born avuncular tycoon’s life was anything but relaxed. Cashed out of TNK-BP deal in 2012, he has since found time to enjoy life.

Fridman’s wealth has since helped some of the world’s top jazz musicians at the Alfa Jazz Fest in his home town on Lviv, Ukraine. He is one of the creators of the Genesis Philanthropy Group, whose purpose is to develop and enhance identity among Russian-speaking Jews worldwide. Genesis endows a $1 million prize for Jewish contributors to humanity.

Viktor Vekselberg is one of the five Russian oligarch’s who controls the AAR consortium. Since AAR’s sale of its 50% stake in TNK-BP to Rosnett for $28billion, his fortune shoot up to $13.8 billion, making him one of the richest Russian businessman. Vekselberg is the owner and president of Renova Group, a large Russian conglomerate, and is the single most important player in world aluminum market. Vekselberg is often given credit for modernizing the Russian economy.

Vekselberg’s rise is fascinating, trained as an engineer, before turning his hand into business in 1990 in the dying month of the Soviet Union, and has never looked back since. Vekselberg’s fortune is still moving upwards.

The fourth richest man in the former USSR with an estimated net worth $13.8 billion has varied interests. He demurs at the media attention, although a few years ago he came in public eye for bringing Russia’s treasures home to the motherland by buying nine imperial Fabergé egg,which cost more than a $100 million.

Alekperov’s other interests include social entrepreneurship. His foundation, Fond NasheBudushee (translated Our Future Foundation) provides interest-free loans and support to socially oriented enterprises across Russia. Since its foundation in 2007, it has distributed loans worth more than $6m.

Harold Hamm’s fortune has been estimated a nearly $12.2 billion dollars. In a 2012 story that appeared in Forbes, the visionary fracking pioneer calls himself a “professional geologist, an explorationist for oil”.

Harold Hamm owns 68% of the company and has an amazing rags to riches story. Born in rural Oklahoma, Harold Hamm was the last of 13 children born to sharecroppers. He started his career in the oil fields as a teenager and later found Continental Resources in 1967 at the tender age of 21.Hamm’s company, Continental Resources, has since grown to become one of the top petroleum liquid producer in the country, and has helped U.S. oil production rise to unseen levels in decades.

Hamm’s philanthropy has a common denominator, “Oklahoma”. Based on his current wealth, Hamm is set to eventually give out a bulk of his fortune, i.e. at least $10 billion to philanthropy.

Rich is really Richard Kinder’smiddle name, the CEO and founder of Kinder Morgan,the fourth largest energy company in North America.A former Army captain, he founded Kinder Morgan in 1997 with his friend William Morgan, after quitting as president of Enron in 1996.

Kinder is the wealthiest man in Houston. Kinder owns just under 24% of the company stock, and receives a salary of $1 a year. Although, it’s quite magnanimous compared to the annual dividend of $400 million.

Russian businessman Leonid Mikhelson owns 25% of OAONovatek, Russia’s biggest independent producer of natural gas. In July 2015, his personal net worth was at an estimated $11.7 billion. Although, he hit rough patches when he lost almost 40% of his $17 billion fortune due to a number of factors, including the decline of Russian currency, weak oil prices, and economic sanctions imposed on Russia by Western nations in light of the Russia-Ukraine crisis.

The son of the head of the Soviet Union’s largest pipeline construction trust, he started his career as a foreman at a construction and assembly site, working his way up to the position of Chief Engineer of Ryazantruboprovodstroy in 1985, two years later becoming the General Director of Kuibishevtruboprovodstroy.

Mikhelson currently holds the position of Chairman of the Board of Directors of ZAO SIBUR and serves as the Supervisory Board of OAO Russian Regional Development Bank. He is also the largest shareholder of the First United Bank, and one of the most influential people in Russia. Besides being a prolific businessman, Mikhelson is also a passionate art collector.

Anna Domanska
Anna Domanska is an Industry Leaders Magazine author possessing wide-range of knowledge for Business News. She is an avid reader and writer of Business and CEO Magazines and a rigorous follower of Business Leaders.
« Be Your Own Boss
Space Tourism: The Ultimate Luxury Frontier »
Leave a Comment
Close