Workflow is one of the most popular automation apps on the iOS App Store, which is now acquired by Apple Inc. Workflow is a powerful tool that automates tasks by merging different apps and functions. It helps users get their things done in a better, smoother and more flexible way. As the founder of Apple Inc., Steve Jobs said, ‘Computer is the bicycle for the mind’; Workflow comes as a modern cycle that helps automate tasks. With hectic schedules and more tasks at hand, users have come to love this tool that helps them simplify their tasks. When you get an option to group many actions and perform tasks with just one tap; you are obviously going to prefer this task automation system. Over the past years, since its debut in 2012, Workflow app has seen humongous downloads and dedicated users. 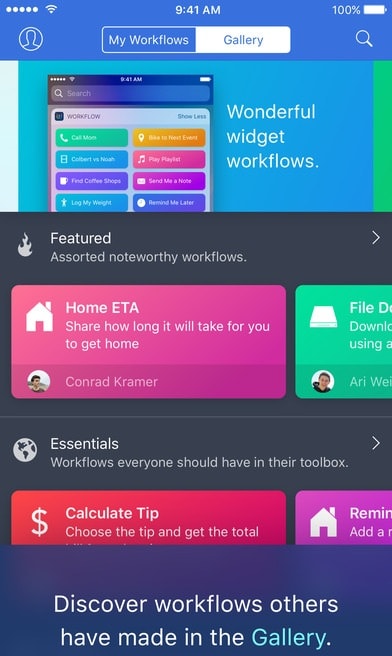 Notably, Workflow app has won an Apple Design Award in 2015. This automation tool was created by a rather small team along with Ari Weinstein, who is an ex iPhone jail-breaker. Weinstein has worked with the Cupertino company since his initial days. Weinstein said that their connection with Apple is right from the days of their student life, to Apple Worldwide Developers Conference (WWDC) scholarship, up to creating and releasing Workflow app; along with witnessing success of the tool on App Store. Workflow team is excited to join Apple and they await to take things to the next level.

Reports on TechCrunch confirm the deal of Apple acquiring Workflow. Further, it also mentions that this acquisition includes the team consisting of Weinstein, Ayaka Nonaka, Nick Frey and Conred Kramer. The financial aspects and terms of the deal are yet to be disclosed. Rather than Workflow, this acquisition is more about the talent behind the creation of this powerful tool.

Apple is reportedly making it a free download on its App Store from now onwards, which was available for $2.99 previously. This talent acquisition will be a mega benefit for Apple; as the possibilities of a super augmented Siri system and other enhanced Apple Apps can be contemplated.

As a matter of fact, the smart team of Workflow app has created such milestones that Apple Inc. itself has applauded and acquired it. From here, it will be an interesting journey for Workflow and Apple both; while we can only imagine the unimaginable in the combination of creativity, automation and iOS productivity after this acquisition.