Is Wood The New Concrete Of The 21st Century?

Wood is undeniably the eco-friendliest building material on the planet. When it comes to ecological building materials, wood has its own class and nothing can be compared to it. Wood is indeed the most priceless asset for the people and the Earth since trees are self-regenerating like any crop and can absorb carbon dioxide as they grow. Just like snowflakes, no two pieces of wood can ever be the same on the planet. Vancouver architect, Michael Green long-time advocate of timber construction and the Canadian wood frame construction has proposed North America’s tallest ‘wooden’ skyscraper in a bid to change the face of sustainable architecture. 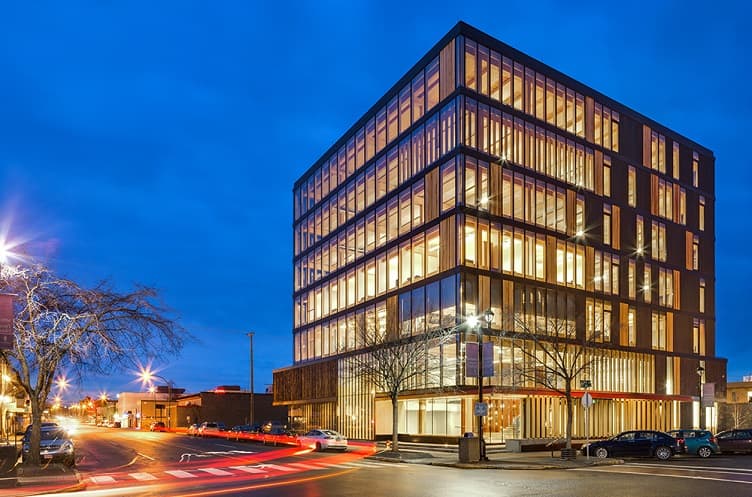 Since the British Columbia building code permits only a six-storey wooden structure, the building’s floor to floor heights have been boosted to make it taller than an average nine-storey structure.

The 27.5 meters, ‘Wood Innovation Design Center (WIDC)’ in Prince George, British Columbia will display wood as a sustainable building material and showcase its many fringe benefits. With wood being a globally available renewable material, it will be promoted as a renewable source that will not only improve the local lumber economy but also stand as a pillar availing innovative outcomes in construction. The six-storey structure will contain a mezzanine level, classrooms, offices and an open public gallery on the ground floor consecrated to the perceptible experience of wood, loungers, as well as a rooftop deck. The state-owned project will likewise put up the University of Northern British Columbia’s Masters of Engineering program as well as provide space for private offices and public spaces.

Made entirely from cross-laminated timber (CLT) panels, even the elevator code which is generally made using concrete is being made from thick timber panels whose density and size can withstand proper fire rating characteristics. The confining framework empowers a more noteworthy exterior transparency, allowing natural light and extending the appearance with a low emissivity glass coating and misty timber screens.

The floor and roof that help control solar access sections of the wooden skyscraper will be made out of mass timber panels (MTP) that give sidelong firmness as well as annihilate the requirement for surface finishing, and accommodate a lot of design opportunities for future wood construction within. When it comes to tall buildings, two materials, concrete and steel have been overused leaving little to zero space for more innovative infusion of other renewable materials. But, with the rise of climate change in recent years, it has become a top priority for the construction industry to change the existing scenario. According to a report, steel represents roughly 3% of carbon dioxide emissions; concrete represents over 5%, thus totaling the contribution of both the materials at 8% alone, while transportation of concrete and steel represents more than 5% of carbon dioxide emissions.

Michael Green, Principal at Michael Green Architecture highlights a number of sustainable alternatives for the climate challenge in the urban world through his work. A highly-anticipated study on the same, The Case for Tall Wood Buildings pushes new ways of construction using renewable, durable and sturdy naturally available building materials. Did you know that one cubic meter of wood can store one tonne of carbon dioxide? It does! When it comes to addressing our climate change woes, wood is the only globally available renewable building material that can not only reduce greenhouse gas emissions but also store carbon.

In comparison to steel and concrete, cross-laminated timber (CLT), which is also known as mass timber that is used in the construction of wooden skyscrapers, is sustainable, cheaper, more fire resistant and readily available. A nine-storey wooden building called Stadthaus by architects Andrew Waugh and Anthony Thistleton in London can store 186 tons of carbon. A steel and concrete building here would have generated 137 tons of greenhouse gases during its construction. CTL has become unconventional architects’ favorite toy these days and is called “plywood on steroids” by engineers these days.

Demographs have shown that with urbanization doubling in 36 years, there will be an ever-increasing demand for taller structures in denser parts of cities that are overly-polluted. Innovative and sustainable building materials such as CLT would prove to be a huge asset to the planet and construction pioneers. In May 2014, US Department of Agriculture (USDA) announced a $2m competition “Made in Rural America” to exhibit the feasibility of wooden “plyscrapers”. The USDA believes that just a 4-storey wooden tower can cut down greenhouse emissions equivalent to taking 500 cars off the road for one full year.

Skidmore, Owings & Merrill, the architecture firm behind both, America’s tallest building, the new One World Trade Centre in New York and the world’s tallest building, the Burj Khalifa in Dubai conducted a study last year. They concluded that a 125m-high skyscraper made from mass timber products is theoretically practicable, economically competitive and could reduce its carbon footprint by up to 75%.

Can you imagine a city full of wooden tower absorbing tons of carbon? It is absurd to think that wooden skyscrapers can be as tall as today’s concrete and steel towers, but it still is a viable option to combat climate change. While steel was the material of the 19th century, concrete and steel of the 20th century, wood is the new concrete in the 21st century!

Neslon admitted that gasoline, travel, food courts, and business centers performed exceptionally well, adding to the overall profits. The retailer hit an all-time high when it came
12 hours ago

Musk has been critical of Twitter’s free speech policies as he believes the social media giant is “the de facto public town square.” When the Elon Musk Twitter deal was annou
12 hours ago