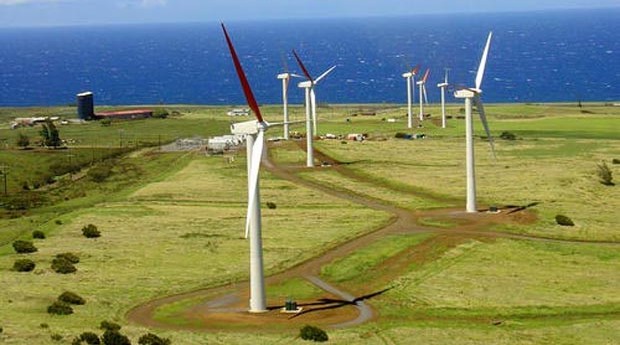 A $140million wind energy project, set up by Boston-based First Wind, promises to generate 2 to 5% of the annual electricity consumed on Oahu, powering around 7,700 homes.

Hawaii has imposed upon itself a mandate of producing 40% of its energy needs from renewable sources by 2030. The turbines at the Kahuku Wind Farm are a landmark achievement for Hawaii towards realizing its energy independence.

Like First Wind CEO Paul Gaynor said, “…it’s a small step but I think it’s an important one.”

The Wind Farm installation at Kahuku comprises twelve turbines which constantly produce electricity by cutting through the trade winds.

Installation of these 42-storey-tall turbines was started last summer by First Wind. The set up between the Hawaiian Electric Company and the Kahuku Wind Farm is such that if the winds suddenly switch off, a back-up battery system comes into play and stabilizes the flow of electricity from the Hawaiian Electric Company’s grid system to the homes otherwise powered by the wind turbines.

Weighing out the Costs

Many good intentions get thrown aside when people have to grapple with the fact that doing the right thing is often more expensive, even if only in the beginning.

On Oahu, the wind power generated by Kahuku’s turbines currently costs about 10% more than oil. However, Hawaiian Electric Company’s CEO Dick Rosenblum expects these costs to eventually tone down.

With HEC having signed a contract with First Wind that gives them ownership of all the power generated by the Kahuku wind farm for the next 20 years, Rosenblum said “Over the life of the project we expect it to be not just equal to price of oil but in fact cheaper than the price of oil… That’s our goal, to reduce rates to what they otherwise would have been on oil and to stabilize them so they’re not constantly changing.”

As per Gaynor’s statement, another First Wind Project at Maui, the 30 MW Kaheawa Wind Farm, which is up for expansion by another 21 megawatts, already produces energy at a rate cheaper than petroleum.

Hawaii’s Gov. Neil Abercrombie’s proposal of developing a statewide rate structure for energy based on contributions by the different islands might help in bringing down the costs involved with producing wind energy significantly.

“Each island has its own capacity to renew a portion of renewable energy, so we need to integrate that,” said the governor.  “No longer are we going to see this as separate companies, or separate islands or separate counties, it’s all going to be together.”