Indra Nooyi is a great leader – that is a well-established fact. Indra Nooyi’s leadership qualities and style are results of life-long learning, conviction, and passions to follow her visions. She may have stepped down as the CEO of PepsiCO, but her leadership lessons will continue to be a guiding light for CEO’s and aspiring CEO’s alike for many years to come. 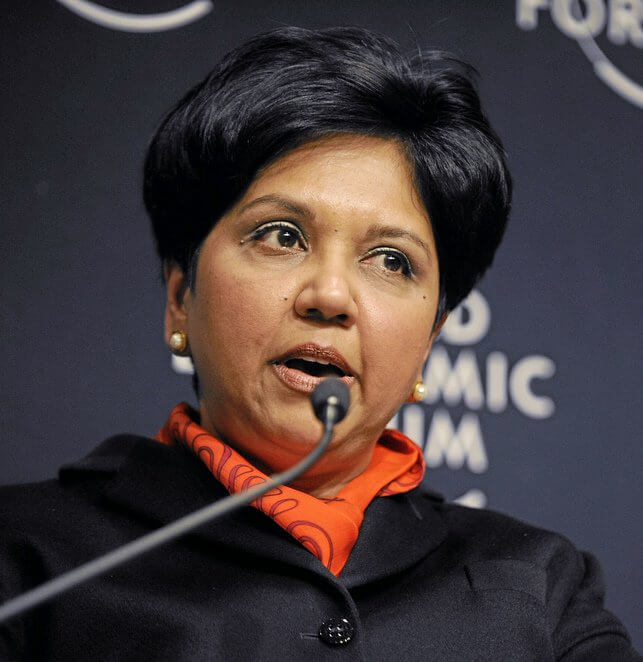 PepsiCo is the largest Food and Beverages Company in North America and Indra Nooyi held the reigns of CEO for 12 long years. Under her leadership, PepsiCo’s revenue grew from $35 billion in 2006 to $63.5 billion in 2017 and by the end of last year, total shareholder return was 162 percent.

Indra Nooyi is consistently ranked among the most powerful women in the world. A humble person, a charismatic leader, and an inspiration for the many women around the world who are striving to balance work and family life. Indra Nooyi’s leadership qualities and style is an anomaly. She isn’t the “delegate-foresee-manipulate” kind of a leader, she is well known for her “working together and being totally honest” leadership style.

Indra’s and PepsiCo’s success under her tenure is rooted in the way she leads. Listed below are Indra Nooyi’s leadership qualities that make her such a great leader, as observed and lauded by many.

She is a visionary

“Have a vision,” we all hear that a lot. Nooyi explains what that phrase really means. Companies today don’t exist in a vacuum. In today’s global economy, everything is a part of a domino ensemble. Being such an important company for America’s economy and for the world, Nooyi had the responsibility of making decisions that not only affected PepsiCo, but the entire world. Her motto was “performance with a purpose” which she translated into PepsiCo’s operations by pivoting to healthier and more sustainable options. Nooyi completed a number of acquisitions in this direction. Acquisition of health food brands such as Kevita, was one of them.

This fresh approach also helped PepsiCo cope up with declining sales in carbonated drinks and junk food. As part of the company’s pledge to reduce obesity rates, and their primary products being soda and chips, Nooyi reduced the sugar, fat and salt content in their products and introduced diet options across its range. Her vision was not just to take PepsiCo forward, but to take everyone forward along with it. A multi-faceted vision, one that makes you think about something from all angles; is a vision that great leaders undertake.

She treads with courage

Another great leadership lesson for Indra Nooyi is to have the courage to innovate. Great leaders are those who take decisions with conviction, even amidst scrutiny and criticism.

When Indra Nooyi took the decision of making PepsiCo products healthier, the critics were harsh on her. They told her to forget about nutrition and just focus on selling more chips and soda. But she knew her responsibility and treaded with courage. So she stuck with it and didn’t just take more steps in producing healthier and sustainable products, but also created the Healthy Weight Commitment Foundation. The result was the reduction of 6.4 million calories from their food and beverage products, surpassing their pledge by more than 400% three years ahead of schedule.

Not long after Nooyi took the CEO’s position, she realized that the company needed changes to be more relevant in today’s modern world. And that meant overhauling their IT systems- a cost estimated to be in billions. There was scrutiny, but Nooyi knew that the company’s future was at stake, so she listened to and addressed all concerns of skeptics. It took time but everyone was on-board and once the overhaul was done, there were no regrets.

Leadership qualities of Indra Nooyi also involves her being an expert communicator. “You cannot over invest in communication skills—written and oral,” said she while emphasizing on the importance of communication skills for being a good leader. There was a time when activist investors were pushing  to separate the soda and Frito-lay business. Nooyi argued that keeping the two companies under one umbrella was vital to maintaining a competitive advantage over other food retailer and maintain PepsiCo’s stand as an industry leader. With her power of persuasion and communication skills, she managed to curb the talks in 2016.

She is a lifelong learner

You have to be a great student to be a great leader and there’s no phase or time limit of being a student. Great leaders like Indra Nooyi’s are life-long learners. That’s specifically important in the backdrop of the digital age we live in. Nooyi kept herself updated with new technologies and trends. One of the most remarkable leadership qualities of Indra Nooyi is that she is an expert listener. She listened to her peers, her subordinates, and the company’s customers. She mentioned in her article on LinkedIn, “There are always people with ideas for how we can do things differently – ideas we may not want to hear. But I’ve found that when I’ve been willing to listen, I’ve been better for it, as a CEO and a person.”

CEO’s require more than just a management course. It requires getting out of the office and seeing things up close. Nooyi was a people person and she absorbed knowledge from everywhere. She would talk to elected officers, civic leaders, attend workshops to be adept with industry changes, talk to field salespeople, and she even took photos of how their products looked on shelves.