What is Bird’s Nest Soup, Anyway?

Shopping for edible bird’s nest soup in the east can cost you a pretty penny. At anywhere between $2500 and $10,000 per kilogram, it is worth more than silver.

Bird’s nest soup is a Chinese delicacy that has achieved world fame as a youth elixir. People are ready to spend a small fortune as it is believed it helps people retain their youth forever.

Bird’s nest soup, as the name suggests, is made from the nest of the swiftlet bird and is hard to come by. The bird is a native of Southeast Asia, and its nests are found in caves throughout southern Asia, the South Pacific islands, and northeastern Australia. It builds its nests not on trees but in dark caves or at a dizzying height, mostly on mountaintops, in the wild. It uses echolocation to move around. As it is in high demand, natives risk their lives climbing atop steep terrain to gain these nests.

Another vital fact to keep in mind is that these nests need to be plucked at the right time after one batch of eggs has hatched, but before the female swiftlet lays another or else the nests are not deemed worthy and do not attract good prices. The soup’s flavor also depends on the location. 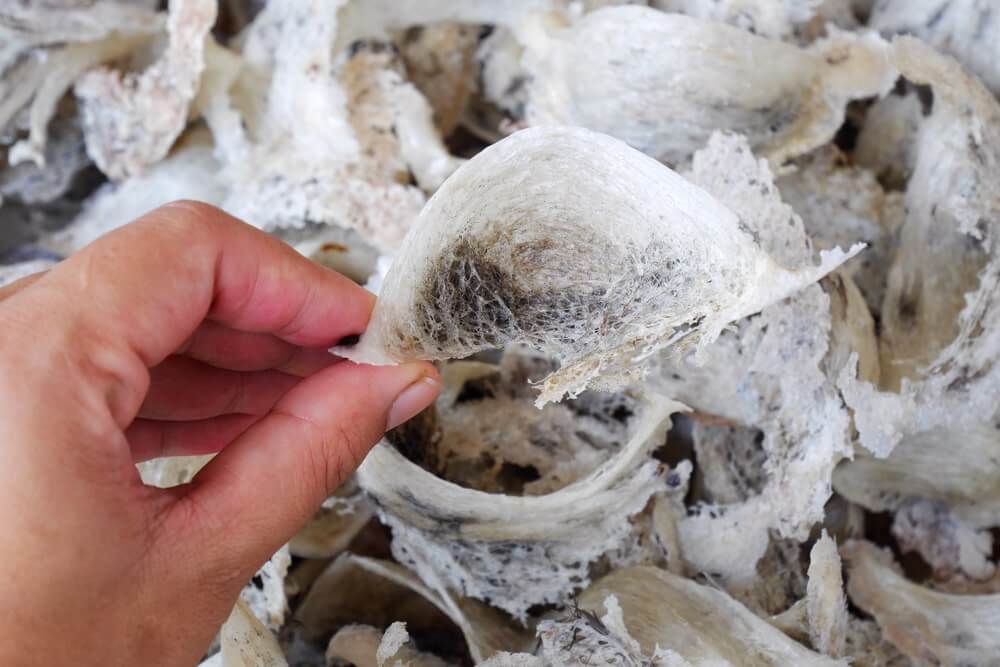 The swallow bird’s nest is cleaned up with special tools leaving only the saliva hardened structure. The most cherished nests are the red ones and the most expensive too.

With the demand increasing, nesting houses have been created for swiftlets to nest in.

The edible bird’s nest is made of strands of its own gummy saliva that is produced from glands in its mouth. The saliva hardens on contact with air. The swiftlet makes quite an impressive structure of brightly colored strands of yellow, white, and red strands, utilizing twigs and feathers too, which is then tightly woven in a hammock pattern. The nest is cleaned up with special tools leaving only the saliva hardened structure. The most cherished nests are the red ones and the most expensive too.

The special ingredient in the soup is the “nutri-collagen,” which helps in collagen formation. A regular diet of the soup, (experts recommend 6 grams every day) will undoubtedly lead to a more youthful vigor in some. People who have tasted it say it tastes like chicken soup with a sweet flavor and a sticky texture.

The perfect way of cooking it is to soak it overnight and slow cook or steam it. Microwave or a quick turn on the gas stove leads to loss of its flavor, benefits, and gelatinous nature. The bird’s nest is used as an ingredient in jellies, cookies and noodles, and rice too.

The bird is now considered endangered in some countries. The nests come under an animal by-product category and are strictly regulated by Food and agricultural departments in bland, tasteless, and native countries. The fear of H5N1 avian flu has also led to a ban on the swiftlet nests.

Difficulty in locating nests many people have started farming the nests in concrete and abandoned buildings.

Anna Domanska
Anna Domanska is an Industry Leaders Magazine author possessing wide-range of knowledge for Business News. She is an avid reader and writer of Business and CEO Magazines and a rigorous follower of Business Leaders.
« Safari escapes in Iceland…and more holiday ideas
A Timeline of Disney’s Biggest Acquisitions »
Leave a Comment
Close