July 4th fireworks spending worth over $1 billion yearly, according to CPSC’s estimation, with 99 percent of the economic benefits channeled to China.

July 4th fireworks mark America’s most cherished symbol of liberty. It’s typically a time to spend with loved ones, munch homemade barbecue, and of course, blow things up. To be more précised, Independence Day won’t be complete without the fireworks spending, and most of us know this holiday as the most expensive one. Aside from self-inflicted injuries from costly celebrations, July 4th spending is in billions.

Ironically, nearly all the economic benefits go to fireworks firms over 7,000 miles away. A whopping 99 percent of all fireworks that glitter the US skies during the festival are imported from China. Not minding where the sky-enriching combustibles are produced, July 4th fireworks spending amount to over $1 billion yearly, according to the American Pyrotechnics Association. That’s roughly 268 million pounds of fireworks by weight or a pound of pyrotechnics for every American, including women and children.

Most people would set off their own glittering displays as a makeup in the entire states as well as some urban areas where many types of fireworks are banned. That causes people, mostly men, to burn themselves at alarming rates, according to the Consumer Product Safety Commission (CPSC). The agency reported that 62 percent of the estimated annual fireworks-related injuries for 2018 occurred in a one-month period between June 22, 2018, and July 22, 2018. That’s down 8 percent from the previous year’s similar report. 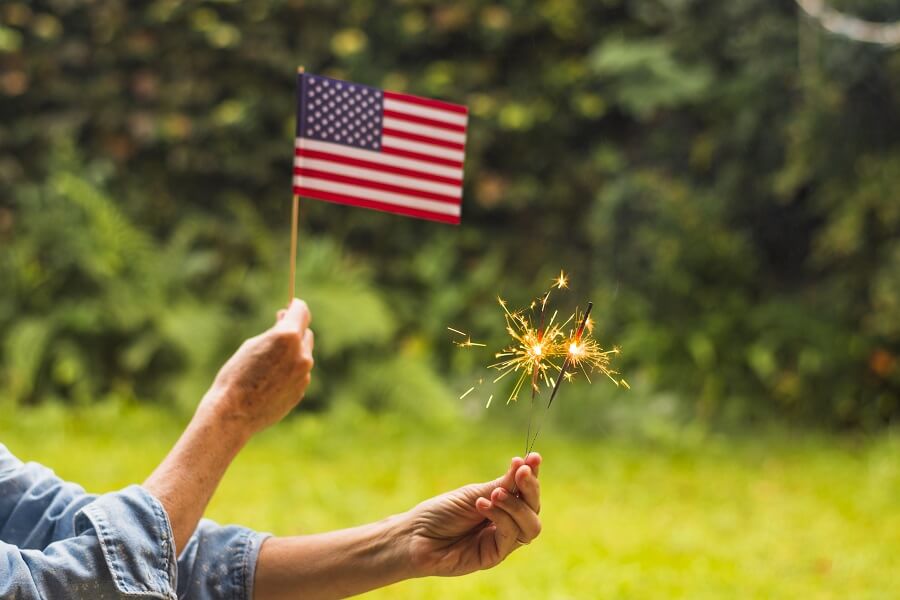 Children between the ages of 10 to 14 years had the highest estimated rate of fireworks-related injuries in 2018.

Sadly, until now, only 10 percent of fireworks that make it to the US skies are set off professionally. In 2018, fireworks caused an estimation of 9,100 injuries treated in US hospital emergency departments. That’s roughly 2.8 per 100,000 individuals in the estimated rate of emergency department-treated injuries. Patients had injuries mostly on their hands, faces, heads from fireworks products, including sparklers, bottle rockets, roman candles, and other firecrackers, says CPSC.

Some states are working hard to record the minimum injuries and occasional casualties from exuberant July 4th fireworks. While Illinois, Vermont, and Ohio are saying yes to only sparklers, which is still injury prone, Massachusetts has since declared any form of fireworks illegal. However, many urban areas won’t let anyone lit fireworks except on approved days, including July 4th.

Meanwhile, safer fireworks alternatives, such as drone swarms are beginning to reshape the use of firecrackers in other countries. Until we are able to convince ourselves that some flying gadgets can be patriotic enough to set themselves on fire, it will be difficult to cut down the July 4th spending and bizarre records for blisters and unwanted burns.

It’s not enough to celebrate the reduced overall injury rates. CPSC reported five non-occupational firework-related deaths in 2018 which calls for more efforts. Of the 5,600 estimated fireworks-related injuries sustained in 2018, only 36 percent were to females, 64 percent were to males, with children between ages 10 to 14 years having the highest estimated rate of fireworks-related injuries.

Anna Domanska
Anna Domanska is an Industry Leaders Magazine author possessing wide-range of knowledge for Business News. She is an avid reader and writer of Business and CEO Magazines and a rigorous follower of Business Leaders.
« Email best practices from Email marketing Industry Leaders
Bottoms up! Americans to spend $1 billion on beer this Fourth of July »
Leave a Comment
Close

It is only in the last century or so that women have been publicly acknowledged for their roles as leaders in various fields. Here’s a list of women influencers by Industry Leade
18 hours ago

Samsung Electronics has estimated profit to soar by more than 25 percent – the highest level in three years in the third quarter.
1 week ago