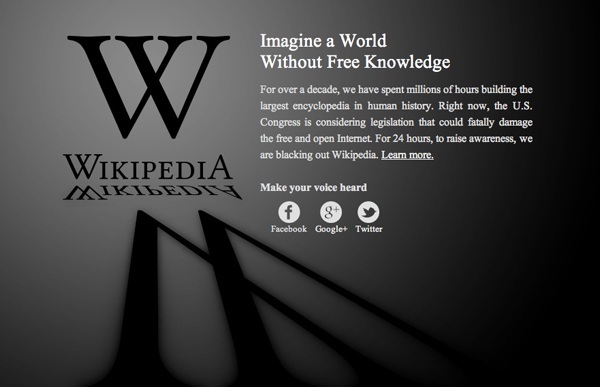 About a dozen websites including a couple of Business News website went dark today to protest a pair of controversial anti-piracy bills: he Stop Online Piracy Act (SOPA) and its Senate companion, the Protect IP Act (PIPA). The websites claim that the anti-piracy bills will burn down the Internet and stifle free speech. Wikipedia, the popular crowd-sourced online encyclopedia, took its English-language content offline as part of a ‘day of darkness’ and blacked out its Web pages as part of the global protest against anti-piracy legislation making its way through Congress. This is the reason users are facing trouble using Wikipedia, one the major participants in the SOPA blackout protest, today.
Sopa and Pipa intend to imprison anyone found guilty of streaming copyrighted content without permission 10 or more times within six months. Any site accused of “enabling or facilitating piracy” could be shut down.

Wikipedia founder Jimmy Wales warned on Twitter, “Student warning! Do your homework early. Wikipedia protesting bad law on Wednesday!” and with that, one of the most heavily visited websites, began a 24-hour ‘blackout.’

Reddit, the well-liked and accepted link-sharing site got the ball rolling for a 24-hour Internet blackout today. Along with Reddit and Wikipedia, other sites participating include in the SOPA blackout are Mozilla, BoingBoing, TwitPic, WordPress, MoveOn.org and the ICanHasCheezBurger network. The search giant Google also confirmed its solidarity with a protest doodle and message, “Tell Congress: Please don’t censor the web,” but the site was available for search. Google struck a virtual black tape across the word ‘Google’ on its home page, as if it were muted.
Wikipedia’s Wales said, “This is an extraordinary action for our community to take. We simply cannot ignore the fact that SOPA and PIPA endanger free speech both in the United States and abroad, and set a frightening precedent of Internet censorship for the world.”

Along with the Internet-based protests, several opponents are physically protesting outside of their congressional representatives’ offices. Reddit co-founder Alexis Ohanian said in Tuesday’s press conference it will “probably be the geekiest, most rational protest ever.”

There are already several laws that protect copyrighted material, including the Digital Millennium Copyright Act (DMCA). The DMCA focuses on removing specific, unauthorized content from the Internet and SOPA & PIPA instead will be targeting the platform, which is the site hosting the unauthorized content.

The anti-piracy bills would give the Justice Department the power to opt for foreign websites willfully committing or facilitating intellectual property theft ‘rogue’ sites like The Pirate Bay.

Such legislation would directly affect libraries such as the Internet Archive, which collects, preserves, and offers access to cultural materials. The anti-piracy bills would encourage the development of blacklists to censor sites with little recourse or due process.

Anna Domanska
Anna Domanska is an Industry Leaders Magazine author possessing wide-range of knowledge for Business News. She is an avid reader and writer of Business and CEO Magazines and a rigorous follower of Business Leaders.
« U.S. Sanctions Against Chinese Oil Traders Over Iran
Keystone XL Pipeline Project trashed by Obama Government. »
Leave a Comment
Close