Extra arms means you can finally have access to all the buttons at once on an N64 controller.

A pair of wearable robotic arms has been developed by designer Yamen Saraij, an assistant professor at the Graduate School of Media Design Keio University (a private university in Tokyo). The robotic arms, which can be worn like a backpack, are remotely controlled by someone else using virtual reality controllers. Aside from the long and lanky robotic arms attached to the wearable backpack, the device is also equipped with two cameras, mounted on top of the backpack which provides visuals to the remote user. Through an oculus rift virtual reality headset, the remote user is able to see what the backpack wearer is seeing while controlling the extra limbs with the virtual reality controllers.

The project referred to as fusion is aimed at exploring how people can work together to augment, or control, another’s body. And the project featured other members of the university as well as the University of Tokyo.

How the wearable robotic arms work

The long extra arms could help weares reach out to more distant objects and to also complete multiple tasks instantly with the help of a remote user. Various fingers on the wearable robotic arms can be controlled effectively using different buttons on the oculus rift controllers. And the fingers can be moved simultaneously. Occasional neck rub, high-fiving, and hugging are also pleasantry gestures achieved using the extra arms aside from picking up objects. 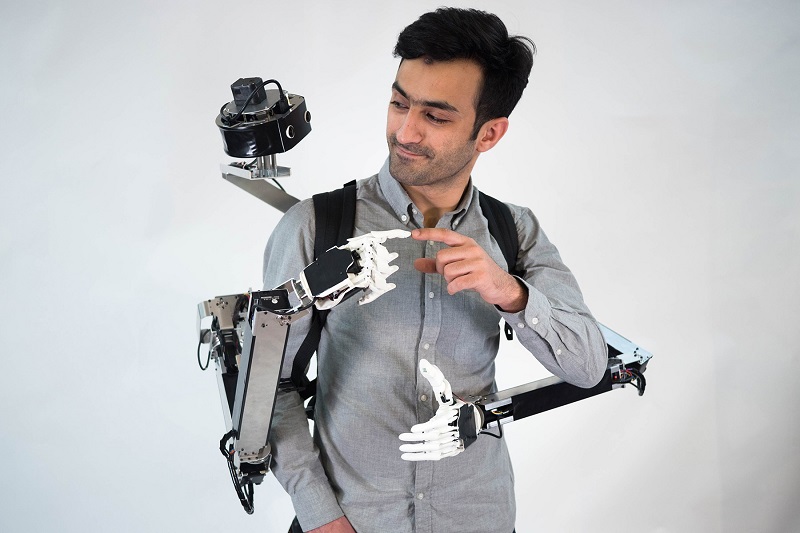 Aside from this project, Saraji has built MetaLimbs; also a wearable set of hands and arms, controlled by the users using their feet.

To control the wearer’s hands (another way of using the device), users can replace the mechanical hands with straps that are worn around the wrist by the backpack wearer. This enables the remote user to fully move the arms of the person wearing the backpack. The remote user could be in another room or even another country.

Each of the robotic arms has seven joints. The backpack has a PC that wirelessly streams data between the person controlling the arms with virtual reality and the backpack wearer. It also connects with the VR controller to receive input data from the remote user. With the robotic head built with sensors to track motions and two cameras that communicate a live feed to the remote user, including the arms, weigh about 21 pounds (9.6 kg). Inside the backpack is a lithium-ion battery that powers the wearable robotic arms. On a full charge, the battery can last up to an hour and a half.

Aside from this project, Saraji has led other similar projects. He built MetaLimbs; also a wearable set of hands and arms, controlled by the users using their feet. The difference here is in the designer’s quest to evaluate how controlling the actions of another person works.

MIT principal research scientist Hermano Igo Krebs, who has also studied how to use robots in rehabilitation for many decades, thinks Saraji robotic arms would not be useful in rehab, according to MIT Technology Review. But he acknowledged that the device will be very useful in many other situations such as assisting astronauts in the space.