I’m not going to lie. I am hooked to Pokémon Go. I think about catching Pokémon’s, leveling up and nurturing eggs at every waking moment of my life. This sentiment doesn’t just stem off nostalgia (I’m a 90’s kid), in fact, it’s just how darn addictive the game is! I mean, it’s an augmented reality game made for masses who aren’t hard-core gamers – guys, girls, tech, non-tech, mom-dads and basically just about everyone. What isn’t there to love about it? The game is absolutely nuts, and I’m amazed how game designers have executed the “hook model” to get users hooked to it – way to go Pokémon Go game designers! Being a go-get-them nut, I couldn’t help but look into the Pokémon Go success story and learn what makes this game so popular. Before I share it with you…

It took Pokémon Go less than 5 hours to top the charts at the US App Store. Within the first week of its launch, it received 10 million downloads and is now at 100 million downloads. Pokémon Go is generating more revenue than any app on Apple iTunes. It has exceeded Twitter’s 65 million American users. It has high average user time than Facebook, Snapchat, Instagram, and WhatsApp. In fact, the augmented reality game is so popular that the game’s servers have repeatedly crashed in the first week of its launch. Moreover, people aren’t just downloading it, in fact, they’re actually spending tons of cash via in-app purchases. Apparently, the number is out-grossing Clash Royale and Game of War, two of the highest grossing games in the app world.

What is Pokémon Go’s HOOK MODEL breeding on?

What makes Pokémon Go an insanely addictive and wildly popular paid app in the Android and iOS store? After doing some qualitative analysis, I was able to fix down on the ingredients that make it so addictive. 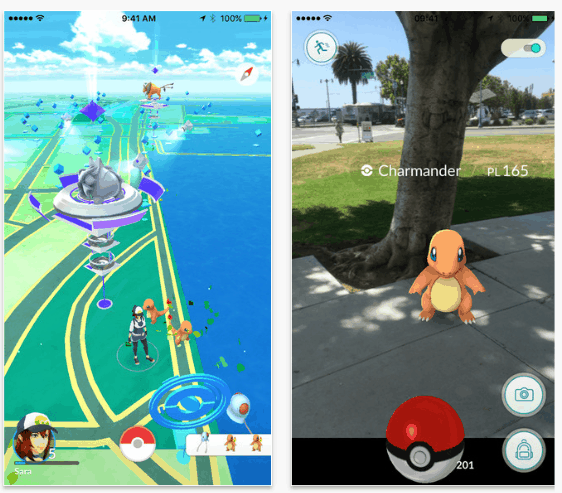 Nostalgia: Pokémon just celebrated its 20th anniversary. Pokémon Go is flooded with memories – kids from the 80s and 80s were extremely enthusiastic about collecting all Pokémon cards and figurines. With a smartphone and a GPS, it is letting us catch Pokémon’s in the real world!

Cure boredom and Get social: Even before Pokémon Go came out, people would walk around staring on to their phone screens. Only difference being, there were hooked to Snapchat, Instagram, and Facebook. There was no augmented reality connecting these apps into the real world. With Pokémon Go, you could meet a stranger at a bus stop and exchange hints and tips on how to catch a rare Pokémon on Pokémon Go like Snorlax and Dratini. The game is literally causing people to get out of their homes and network with people! And since there is no in-app messaging or sharing features, you have to take a screenshot and share it with your friends on the social network of your choice.

Fitness: Let’s just say, Pokémon Go is a low-key fitness app. Pokémon Go requires you to literally walk around to catch Pokémon’s. You can drive around, but the chances of catching a Pokémon are very thin. And believe me when I say this, no other fitness app on any app store has created as much as buzz as this augmented reality game. My Twitter feed is flooding with thousands of screenshots from people documenting their physical activity. (In case you’re a time traveler from the 16th century, the game involves walking around to catch furry creatures.)

Buzz and Fear of missing out: Fear of missing out is what got me to downloading this app in first place. Moreover, never has my Monica Geller-level competitiveness become so overpowering. I have this urge to beat my friends and colleagues who are leveling up against me in the game. In fact, the game is so dope that it releases the same chemical that regulates our pleasure centers (Bye-Bye! sex and chocolates!).

I have a little something for those of you who believe they can achieve overnight success and become instant millionaires. Overnight hype doesn’t equal to overnight success. In 1996, John Hanke, while still a student co-created the first MMO (massively multiplayer online game) known as Meridian 59. He sold the game to 3DO to move on to something even bigger and better: mapping the world. In 2000, Hanke launched Keyhole the internet’s first GPS-linked aerial map of the world. He went all the way to linking maps with aerial photography. In 2004, Google acquired Keyhole, and with Hanke’s expertise, it created what we now know as Google Earth. That’s when Hanke decided he wanted to create GPS-based games. Between 2004 and 2010, Hanke created Google Maps and Google Street. During that time, he hired people who would later become the core team behind Pokémon Go.

In 2010, Hanke launched Niantic Labs, a start-up funded by Google to create GPS-based games. In 2012, Hanke created Ingress, Niantic Lab’s first geo-based MMO – basically a Pokémon Go prototype without all the Pokémon. Two years later, in 2014, with the help of Google and the Pokémon Company, he created the April Fools’ Day Joke, which allowed users to catch Pokémon on Google Maps. It got Hanke to thinking if it is virtually possible – to create a GPS-based game that allowed users to catch Pokémon’s in real life. He decided to build Pokémon Go, on safe, Ingress user-generated meeting stops, which later became Pokémon gyms and Pokéstops. Between December 2015 and February 2016, Hanke raised $25 million from Google, the Pokémon Company and other investors. He also added 40 members to the team to launch Pokémon Go.

On July 6th, he and his team launched Pokémon Go in USA, Australia and New Zealand on Android and iOS. Since the launch of the augmented reality game, Nintendo’s share price has risen to $12 billion, and the app is already generating over $2 million via in-app purchases. In fact, it has proved that augmented reality has way more potential.

Success doesn’t come overnight. You can have a vision, but that doesn’t mean it will help you glide on ice, frictionless to the island called instant success. You have to level up each time you meet a new obstacle. Keep going, you never know what’s going to happen tomorrow.

I’ll probably stop playing once I’m done catching 50 Pokémon’s or maybe not. I play Pokémon because it encourages me to walk more steps every day (in order to hatch the eggs!) nonetheless, it’s making me go out of my way and do something I haven’t done in a long time. Way to go Pokémon go!