Bitcoin is equal to rat poison. But investing in a digi bank that lets people trade with bitcoin is just good finance.

Cryptocurrency is one of the most polarizing topics in finance today. To invest or not to invest? Experts across the world have struggled to justify their stance on crypto. On May 1, financial wizard and Berkshire Hathaway CEO Warren Buffett expressed his distaste for bitcoin. At the company’s annual shareholder meet, crypto investors were stunned after hearing the opinion of Warren Buffett on cryptocurrency. He said that he would not take any bitcoin even if it was practically offered for free.

What did Warren Buffet say about Bitcoin?

Buffet did not mince words as he criticized bitcoin by explaining the logic behind his stance, “Whether it goes up or down in the next year, or 5 or 10 years, I don’t know. But the one thing I’m pretty sure of is that it doesn’t produce anything.”

Warren Buffett on bitcoin has always courted controversy with his statements. He went on to say that he doesn’t trust bitcoin as it does not yield anything, unlike something tangible like land. If you offer me 1% of all the apartment houses in the country and you want another $25 billion, I’ll write you a check. It’s very simple. Now if you told me you own all of the bitcoin in the world and you offered it to me for $25, I wouldn’t take it because what would I do with it? I’d have to sell it back to you one way or another. It isn’t going to do anything. The apartments are going to produce rent and the farms are going to produce food.” 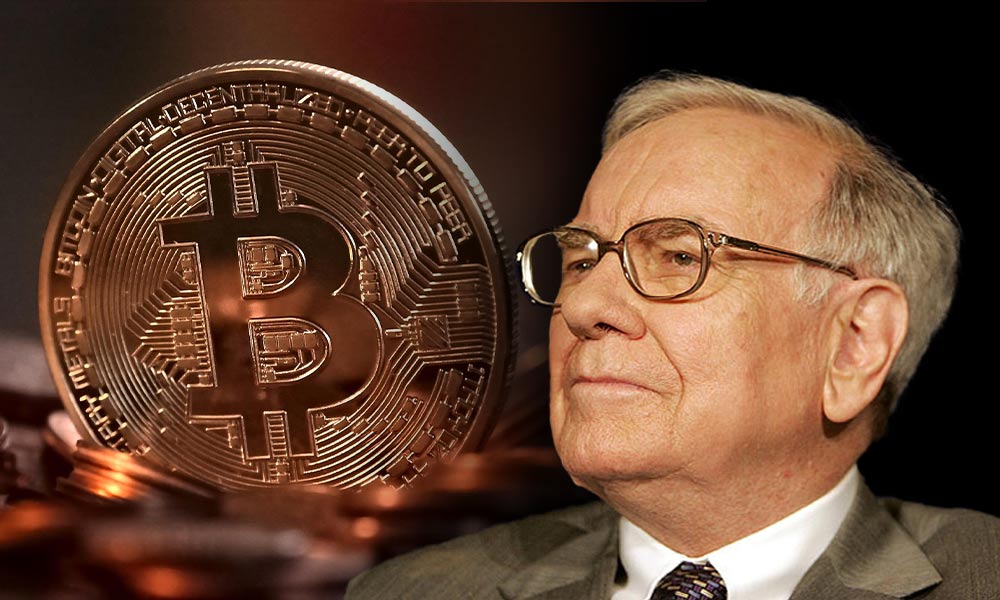 Warren Buffet has always been critical of cryptocurrency but that did not stop his firm from investing in a digi bank that allows crypto trading.

The inflammatory statements did not stop there. Buffet’s good friend and Vice Chairman of Berkshire Hathaway added fuel to the fire by offering his two cents, “In my life, I try and avoid things that are stupid, evil and make me look bad in comparison to somebody else…and bitcoin does all three.”

While most investors seem undeterred by the stance of Warren Buffett on cryptocurrency, Tesla CEO Elon Musk took to Twitter to express his displeasure. Underneath a video of Buffet’s talk, shared by venture capitalist Marc Andreessen, Musk wrote, “Haha, he says ‘bitcoin’ so many times.”

Another man who has long taken offense to the views of Warren Buffet on bitcoin is crypto supporter Peter Thiel. He has criticized his views calling him an “enemy of bitcoin” while few others have chosen to disregard Buffet as he has not been “technology-forward” when it comes to this space.

Earlier this year, news broke that after years of deriding bitcoin as “rat poison,” Berkshire Hathaway had purchased $1 billion worth of stock in NuBank, a digi bank that focuses on crypto.

The Berkshire Hathaway CEO has always been dead-set against cryptocurrency, but his investments and the recent tirade raises questions about his investment strategy. Munger, too, has been quoted as saying that he wished cryptocurrency had never been invented. Meanwhile, Berkshire has been steadily disinvesting in traditional financial institutions and assets. They recently got rid of nearly $3 billion worth of shares in digital payment giants Visa and Mastercard. With indirect bitcoin holdings, Warren Buffett on cryptocurrency appears to be as unstable as the currency’s market value.

While we have always known cryptocurrencies to be volatile, investing in an associated bank seems to have rubbed off those qualities on Buffet.