2021 would see Walmart supermarket fly across the sky, delivering orders at the customer’s door. The retail giant recently announced a trial run with medical drone delivery company Zipline. According to the announcement, as of early 2021, only medical, health, and wellness products from Walmart will be essential in the drone delivery program. This delivery facility will be available only in Northwest Arkansas. The drones will cover a 50-mile radius around the Walmart headquarters of Bentonville, Arkansas. These drones can carry up to four pounds of cargo and fly at a speed of 80 mph.

The items that will be ordered online or through the Walmart supercenter app will be placed into a Zipline delivery box attached to the drone camera. The products, whatever medical supplies it be, will be dispatched from a nearby Walmart stock store. The order is then flown on a pre-programmed route and dropped to the customer’s door on a parachute. After that, the best drone will return to its hub or base. 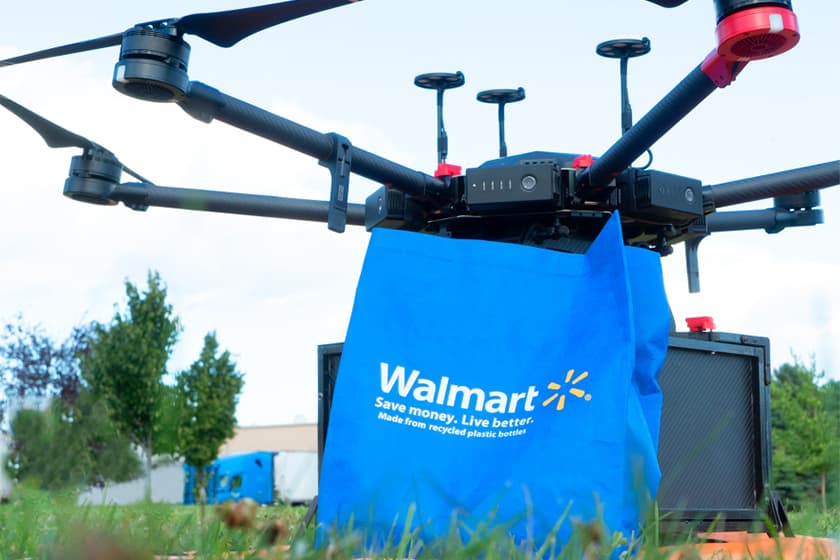 Earlier, Zipline worked in Rwanda and Ghana to deliver medical supplies through drones. Ever since the COVID-19 pandemic broke out, Zipline has been delivering personal protective equipment and medicines to a North Carolina hospital. Once the trial period is over, Walmart stores stated that the delivery program could expand in terms of its coverage area and what supplies the drones carry. Walmart is racing fiercely against Amazon, which recently received FAA approval for its Prime Air flying drone delivery system. Though the online retailer Amazon hasn’t started the service yet, it plans to deliver its orders to the customers within 30 minutes.

At present, Walmart is testing drone deliveries in a small pilot program in North Carolina with Israeli drone company Flytrex. Each of the drones in the program can fly at a 32 mph speed and cover 6.2 miles distances in a round trip. The drones can carry up to 6.6 pounds of weight. Flytrex earlier received approval from the FAA to test the food deliveries in North Carolina.

On its part, Walmart gave out lesser details of the program, including the number of drones involved in the project and the checks and scrutinizes that a customer has to make before receiving delivery. “We know that it will take some time until we see millions of ordered packages delivered via drone to the customers,” stated Walmart senior vice president Tom Ward. “That program still feels like science fiction, but presently we’re at a point where the company is learning more and in-depth about the technology that is available and how it can be used to make deliveries faster and easier.”

Walmart is researching drone delivery for many years, making the initial tests way back in 2015 and experimenting the drones in 2016 at their warehouses. Though delivery drones are on their plans for a long time, several challenges like safety guidelines and high costs than traditional delivery, slowed down the retailer to plunge into drone delivery.

Anna Domanska
Anna Domanska is an Industry Leaders Magazine author possessing wide-range of knowledge for Business News. She is an avid reader and writer of Business and CEO Magazines and a rigorous follower of Business Leaders.
« Jane Fraser to head Citigroup, first female to break the Wall Street Bank Glass ceiling
GM’s CEO satisfied with Nikola Deal and says all due diligence done »
Leave a Comment
Close

PepsiCo will sell Tropicana and other juice brands to a private equity firm in exchange for pre-tax proceeds of 3.3 billion dollars.
13 hours ago

Sanofi’s CEO Paul Hudson is dead serious about mRNA technology and capabilities with a $3.2 billion acquisition offer to Translate Bio.
14 hours ago