A nationwide shortage of truck drivers has prompted Walmart to develop its own fleet of in-house truck drivers. In a bid to lure truck drivers, the company has offered to pay as much as $110,000 per annum.

America’s largest retailer also announced a training program to induct more employees. Those who work in its distribution or fulfillment centers can now switch careers and become a certified Walmart truck driver.

The retail behemoth also promised that drivers who have been with them for a long time will have the opportunity to earn higher pay based on tenure and location. 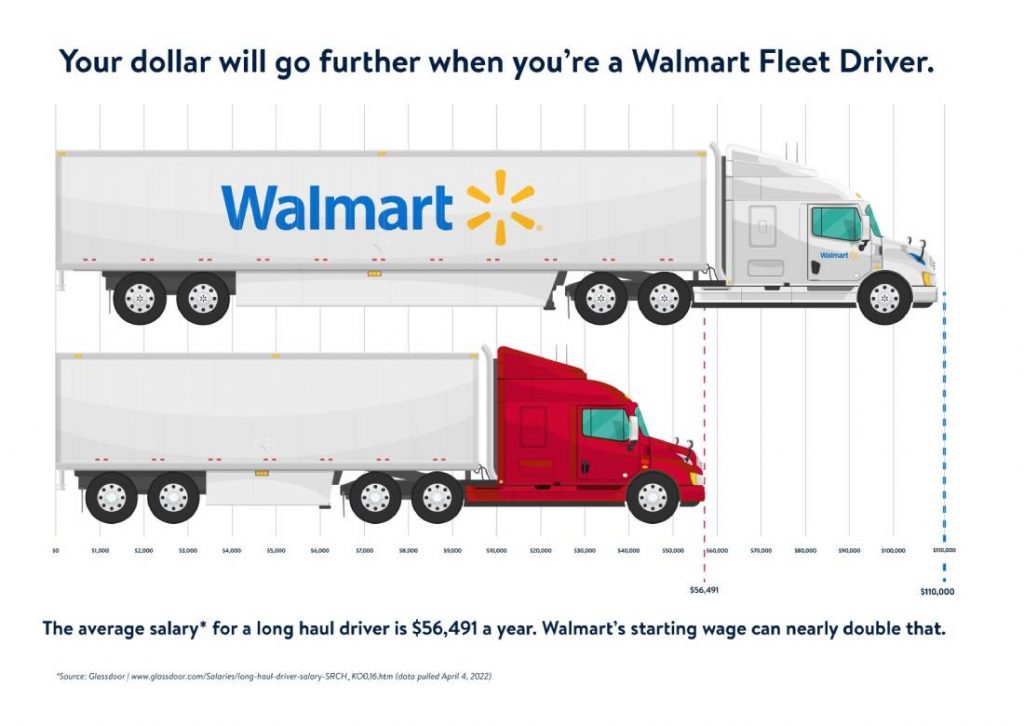 Walmart has promised truckers that they can earn as much as $110,000 per year.

Trucker Shortages in the USA

In February, the New York Times reported that the United States was short nearly 80,000 drivers as per the American Trucking Associations. Trucks move nearly 72% of freight in the country.

As shortage spells doom for most industries as supply chain bottlenecks can adversely affect pricing and delivery. Some experts opine that the industry needs more investment and people.

Meanwhile, a labor expert told the New York Times that there is no shortage of truckers and that people are just rejecting “really bad jobs.”

Labor expert Steve Viscelli argues in his book that until the 1980s, trucking was a lucrative profession and unions helped ensure good working conditions. Later, after the industry was deregulated, an influx of trucking companies increased competition and offered reduced pay while expecting drivers to meet high demands. A decline in union power added to its woes.

Long-haul driving can also be physically and mentally taxing. Industry veterans mention that people are ready to sacrifice money for the comfort of returning home every day. It has now reached a point where demand outstrips supply by a long shot. Truck drivers also have little control over the route⁠ — they have almost no say in where and when. Lengthy wait times and uncertain compensation also play a major role in making this profession seem unappealing to the younger generation.

As per a 2019 report by the American Trucking Associations, the average age of trucker drivers in the US is 46.

In addition to its various policies that support college education, Walmart has launched the Private Fleet Development Program. It is an intensive 12-week program open to supply chain associates wherein they undergo training to become full-fledged Private Fleet Walmart drivers. Associates from Dallas, Texas, and Dover, Delaware, have already earned their commercial licenses through this program.

The Walmart ecosystem aims to develop in-house talent to cater to its diverse needs. Associates are encouraged to develop everything from role-specific skills to leadership skills, as the company provides the required resources and infrastructure.

For the Walmart driver program, the American retailer turned to its existing, established drivers to form trainers. After undergoing training and earning the Certified Driver Trainers certification, they set out to teach a new batch about road safety.

Specialized training is offered at the Walmart Academies, wherein they must ace both theory and practical tests. After the associates complete their classroom training, they hit the road under trained instructions for some real-world experience. They are also provided with mentors to help them ease into their new roles.

To attract and retain drivers, Walmart has assured truckers that improved pay and schedules will help them have a better work-life balance. The company plans to continue investing in developing better working conditions for truck drivers.

As companies scramble to find truckers, executive director for the Alaska Trucking Association, Joe Michel’s advice stands out for its simplicity and straightforwardness. In an interview to Vox early this year, he had but one advice. “Pay them more, treat them better, they’ll stick around.”