Humans seem to be keeping up with the robots in stocking shelves and tracking inventories in Walmart, forcing it to take a relook.

There have always been fears that robots are going to take away a lot of routine tasks and some white-collar jobs too in the future. Artificial Intelligence has already insidiously taken over many supervisory tasks without many being aware of it.

Machines now make rosters for workers to follow, they track every movement on the factory or warehouse floor and even dock minutes for taking a bathroom break or just nor being on the move all the time. Be it in customer support, assembly line or data research, machines are deciding who goes where, at what time. The input output ratio is now being put on optimal mode.

Walmart, the Arkansas-based retail giant had also tuned to robots to keep track of inventory and for doing stacking jobs. But the big-box retailer has decided to end its contract with the robotics company because it found during the pandemic that humans can do more or less the same amount of work.

Walmart ended its contract with robotics company Bossa Nova Robotics Inc., with which it had entered into an agreement over five years ago. Bossa Nova supplied six-foot tall inventory-scanning machines to the various Walmart stores. 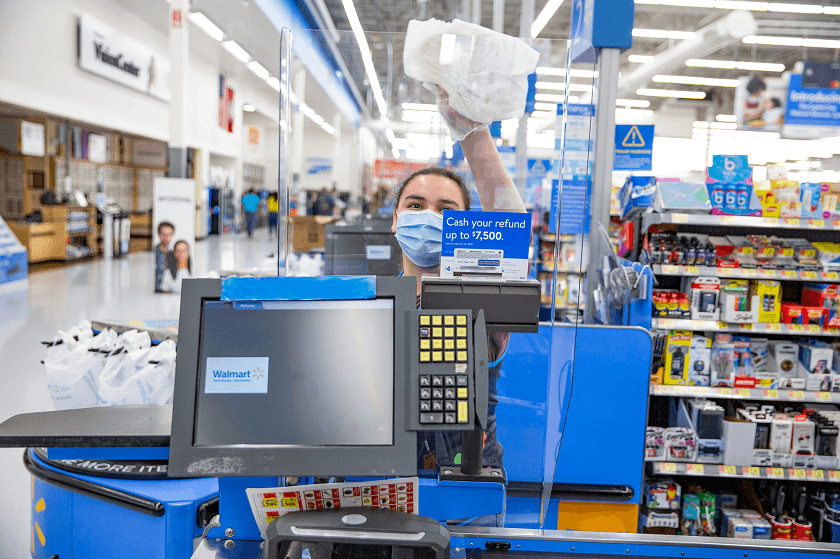 For Walmart, it had become a great talking point to show how these robotic machines helped reduce labor costs and made for an efficient inventory and sales system.

A Walmart spokesperson told the Wall Street Journal that about 500 robots were in Walmart’s more than 4,700 stores when the contract ended.

The pandemic has seen the supermarkets and grocery stores do above average business with people earlier panicking and stocking up. With lockdowns and stay-at-home orders, people’s needs for everyday things have gone up and retailers supplying these products, especially online, are doing brisk business.

Walmart’s online sales have nearly doubled during this period. This has meant that inventories are fast being depleted. In an interview with the CNBC, Walmart CEO Doug McMillon said that out-of-stock products are a problem as things are moving very fast off the shelves, and Walmart needed “to have an even higher in-stock level.”

During the pandemic, the retail chain giant found that humans were able to keep up with the online orders as efficiently as robots. This does not mean that Walmart has decided to abandon its tech-based forays.

“We learned a lot about how technology can assist associates, make jobs easier and provide a better customer experience,” a Walmart spokeswoman said. “We will continue testing new technologies and investing in our own processes and apps to best understand and track our inventory and help move products to our shelves as quickly as we can.”

Walmart has decided to turn four stores into-commerce laboratories that will be the testing grounds for digital tools and see how effective they are keeping things going efficiently and smoothly.

Bossa Nova laid off nearly 50% of its staff after Walmart ended its contracts. The company is now looking for new clients and some more innovations.

Christy Gren
Christy Gren is an Industry Specialist Reporter at Industry Leaders Magazine she enjoys writing about Unicorns, Silicon Valley, Startups, Business Leaders and Innovators. Her articles provide an insight about the Power Players in the field of Technology, Auto, Manufacturing, and F&B.
« Hydrogen fuel market to grow to $11 trillion by 2050
COVID-19 Vaccine: A long-term rainmaker for industry leaders? »
Leave a Comment
Close