Bill Ackman, the billionaire investor known for his high-pressure tactics to strong-arm companies he invests in to their change ways, announced Tuesday afternoon that his hedge fund Pershing Square Capital has taken a roughly $900 million stake in Starbucks. At the Grant’s Fall Conference in New York the activist investor unveiled his core investment thesis that despite recent struggles and flailing market performance, Starbucks is amongst the most powerful consumer brands in the world.

Wall Street has wondered for some time whether an activist might turn their attention to Starbucks’ surmountable troubles, and the moment has finally arrived. Starbucks’ former Chairman and CEO Howard Schultz was not a supporter of meddling outsiders. But Schultz contemplating a presidential campaign might have motivated Ackman to give Starbucks the proper shakedown it needs.

Starbucks stock jumped as much as 5% on the news of the Pershing Square stake, giving the Seattle-based company a market value of $77.9 billion. Despite Ackman’s notorious reputation as an activist investor, Starbucks is welcoming its new shareholder with open arms.

Ackman’s presentation said the company has the potential to be a “category killer” in the away-from-home coffee space because of its “quality and innovation advantage over low-cost coffee and traditional QSR players,” and “convenience, technological and cost advantage over high-end, boutique players.” He also noted that its market share is 15 times larger than the No. 2 player in the space – McDonald’s Corp, and is 3.5 times bigger than the other top 10 players combined.

Starbucks has been struggling with sluggish afternoon sales and a decline in its signature Frappuccino line. It also plans to close about 150 company-operated stores in densely penetrated U.S. markets next fiscal year, three times the number it historically shut down annually. The closing stores are in major metro areas where there are increases in wage and occupancy and other regulatory requirements.

In a memo sent last month, Starbucks CEO Kevin Johnson notified employees of plans to thin out its executive ranks as part of corporate reorganization. The grand reshuffle is meant to revive sales and accelerate its growth overseas as the coffee chain faces competition from new regional chains and as demand for its signature iced-coffee drinks is declining. 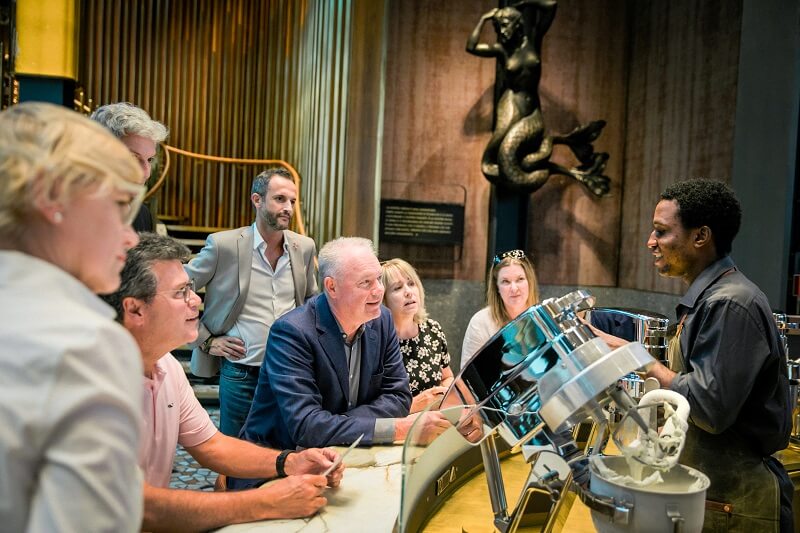 In the U.S. Starbucks can grow in the Midwest and the South that represents a tremendous opportunity. Ackman thinks the company is immunized from minimum wage increased across the U.S. because its employee compensation program is unarguably one of the best, with entry-level pay above the minimum wage in all 50 states.

This week Starbucks named a new CFO, Patrick Grismer, who joins from Hyatt Hotels Corp., where he was CFO.

Starbucks expects China to eclipse the U.S. market in nine years. According to the company’s first quarter report of fiscal 2018, China’s comparable same-store sales increased by 6 percent. In comparison, global store sales only grew 2 percent. It aims to have 6,000 stores and triple revenue in China by the end of 2022.

“We estimate that every dollar Starbucks spends building a new store in the U.S. or China is worth $10 to $15 shortly after the store opens,” Bill Ackman said in the Doppio presentation. “China will become increasingly important to the value of Starbucks over time as it represents Starbucks’ single-largest unit growth opportunity.”

Shareholders also will greatly benefit from Starbucks’ plan to buy back roughly $14 billion shares over the next two years.

In the food and beverage space, Pershing Square placed big bets on Chipotle Mexican Grill, Mondelez, and Restaurant Brands International, which is the parent of Tim Horton’s and Burger King.

The new position in Starbucks comes after the hedge-fund posted its third straight year of negative returns in 2017 due to a string of bets that Ackman has exited, or either yet to pay off. In addition to the disastrous $1 billion short bet against Herbalife, Ackman was setback by an ill-fated bet on Valeant Pharmaceuticals, costing his shareholders billions. He had to cash out on Pershing’s stake of nearly 100,000,000 shares of Mondelez last year after it blew up. The bet on Chipotle is yet to pay off, which is up 53% so far this year.

Bill Ackman has described his investment in Starbucks as a “rare opportunity to own one of the world’s best businesses at a discount.” Since its peak in 2015, Pershing Square Capital has lost more than half of its assets amid a bull market.

Through September, Pershing Square had assets worth $8.3 billion under management and its net performance was up 15.8 percent.

Anna Domanska
Anna Domanska is an Industry Leaders Magazine author possessing wide-range of knowledge for Business News. She is an avid reader and writer of Business and CEO Magazines and a rigorous follower of Business Leaders.
« Ford to redesign its operations and cut global salaried workforce
ExxonMobil Pledges $1 Million to Bankroll National Carbon Tax Campaign »
Leave a Comment
Close