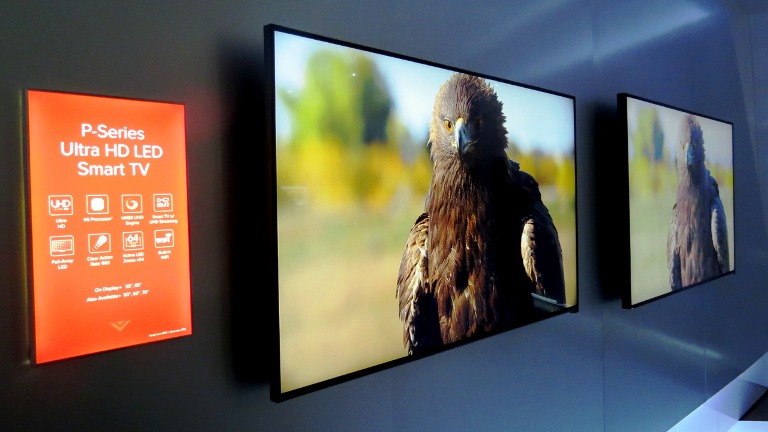 Vizio has taken the cutthroat pricing tactics with its new P-Series televisions with prices starting at just $999.99 for a 50-inch model and scales up $2500 for a 70-inch model. The smart TV features along with an impressive picture quality instantly takes 4K viewing to the mainstream and makes the pixel-rich displays affordable for average consumers.

Vizio is taking pre-orders through its website Vizio.com, and is selling certain sets through major retailers including Walmart, Best Buy, Amazon, Costco, Sam’s Club and Target.

The prices undercut rivals such as Samsung, LG Electronics, Sharp, and Sony whose 4K televisions are priced in the range of $3,000 and $4,000, and feature-laden flagship models cost even more. With the new pricing benchmarks for 4K TVs, Vizio is challenging its rivals to react. While there’s no information on companies reducing their prices, but we might see them inch closer as the holidays approach.

The 50-incher (model P502ui-B1) features a resolution of 3,840 x 2,160, compared to 1920 x 1080 on most current television sets. The P-Series is able to provide more dynamic picture quality with Full-Array LED backlighting with varying degrees of local dimming capability, a 240Hz refresh rate, 50 million to 1 dynamic contrast ratio and 1.07 billion colors. Additional features include HEVC H.265 codec and 802.11ac dual-band Wi-Fi, which allow users to stream content quickly from services like Netflix, the forthcoming 4K Amazon Prime Instant offerings, Ultraflix, and many more services. The models also come equipped with HDMI version 2.0 for Ultra HD resolution at up to 60 frames per second, and HDCP 2.2 support, meaning that Ultra HD movies and TV shows can be protected while the user watches them. The wall mountable set includes composite, Ethernet and USB inputs as well as SPDIF and analog audio out.

Here’s a full listing of the P-Series UHD TV lineup with pricing:

Will Apple manage to post solid earnings in Q3 2021? Here’s what Wall Street’s top analysts have to say ahead of Apple’s Q3 2021 earnings report today.
16 hours ago

Tesla earnings not only blew past analyst expectations but also marked the first time the automaker’s quarterly profit joined the three-comma club.
18 hours ago