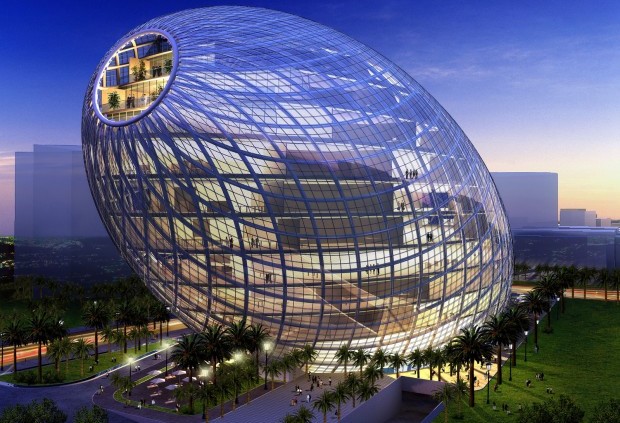 Think Mumbai; what’s the first few visuals that flash by ?

This maximum city, second only to Hong Kong in being the densest place in the world is currently a global symbol of all things stated above. 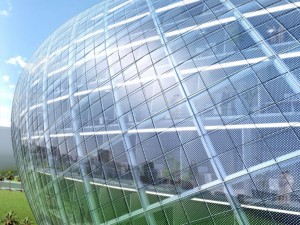 James Law’s intention while designing the Cybertecture Egg, was to bring together iconic architecture, environmental design, intelligent control systems, and evolutionary engineering towards creating this innovative building for the city of Mumbai and for India in the 21st Century.

Why integrate these specific features you ask?

Because, according to James Law “In the 21st Century, buildings will not be created by just concrete, steel and glass as in the 20th Century but with the intangible materials of technology, multimedia, intelligence and interactivity. This enlightment gives rise to a new form of architecture – Cybertecture.”

According to James Law, the Cybertecture Egg has been conceptualized and designed as a sustainable ecosystem derived from the concept of “Cybertecture”. Through its design itself, the building aspires to give its inhabitants both a dynamic physical world as well as access to virtual spaces of the connected world.

Located in Mumbai’s new commercial business district, the Bandra Kurla Complex, the Cybertecture Egg, imagined as a microcosm of the earth, has been envisioned as a beacon and nucleus for this high profile business area.

The Cybertecture Egg, because of its form, occupies 10% to 20% lower area than a conventional building this size would.

Solar photovoltaic panels and rooftop wind turbines facilitate on-site generation of electricity, while a greywater recycling system that harvests water for landscaping and irrigation has been put in place for furthering water conservation.

Extruded from a sphere, with its design having evolved to create a unique and iconic building, the structure of the Cybertecture Egg uses a diagrid exo-skeleton. This creates a rigid structural system, allowing for large column-free floor plates and high space flexibility, the ingenuity of this form being that it effectively reduces construction material use by approximately 15% as compared to a conventional orthogonal building.

While all the above characteristics are great to have in a building, it is these interactive-intelligent features that really set the Cybertecture Egg apart from all the other avante-garde construction projects coming up in India.

While the Cybertecture Egg’s intelligence systems work in tandem with the building’s design to give the inhabitants the ‘best space to work in’, there is also a comprehensive series of systems throughout the building, such as the ‘cybertecture health’ in the washrooms, that monitor the health of the inhabitants. Designed to keep track of the inhabitants’ health including their blood pressure and weight, these innovative systems allow the collected data to be retrieved and also provide for this to be sent to a doctor if required.

As if this isnt impressive enough, the Cybertecture  Egg also allows the building’s inhabitants to “customize” their reality through the use of ‘cybertecture reality’ ; this allows a customization of one’s favorite view. So you could choose to have real time scenery all around your working world if you wanted!

This is the brand new, intelligent, green, interactive, virtual India coming your way.