Like wind and sunlight, gravity is an infinite resource. Regulators in the United States are already considering a scheme that would recognize gravity as a renewable energy source. Meanwhile, far away from the US, somewhere near the Swiss Alps, the future of energy is already in the works at GE Renewable Energy. At Switzerland’s Linthal hydropower plant, gravity is used to produce energy equivalent to the output of a nuclear power plant.

The Linthal hydropower plant is the world’s biggest pumped-storage facility. It works as a battery, which uses moving water to store electricity in the form of potential energy. The operating mechanisms of the power plant are mostly underground, which helps reduce environmental and wildlife impact. 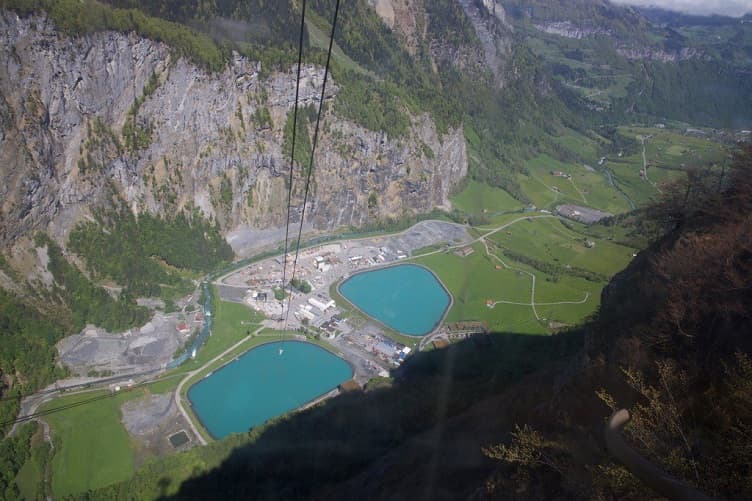 The power plant is located above a narrow Swiss valley. The two emerald lakes at the bottom just store water and are not used for power generation. Image credit: GE Reports/Tomas Kellner

The hydropower plant is accessible only by car. Workers have to start their journey with a cable car and through the meadows sprinkled with grazing herds of Alpine ibex. When they reach at an altitude of 3,300 feet, they switch to a Mercedes truck, which takes them through a two-mile tunnel to the plant. At the command of the power plant’s operator, the Swiss utility Axpo, huge steel valves open. Thus allowing water to run from Lake Mutt to Lake Limmern, located at 2,490 meters 2,490-foot above sea level. About 23 billion gallons of water stop behind a dam in the valley, thus creating a temporary water reservoir. The water in the reservoir feeds the plant’s four General Electric pump turbines that act as GE variable-speed hydro generators, thus converting the potential energy from the falling water into electricity.

When the energy demand is low, the flow on the steel valves is reversed. Thus pumping water back up to Lake Mutt, where it is stored until it’s time to generate power.

“It’s the only grid-scale method of storing energy,” says Maryse François, the hydrotechnology leader at GE Renewable Energy, the company that developed the technology powering the site. 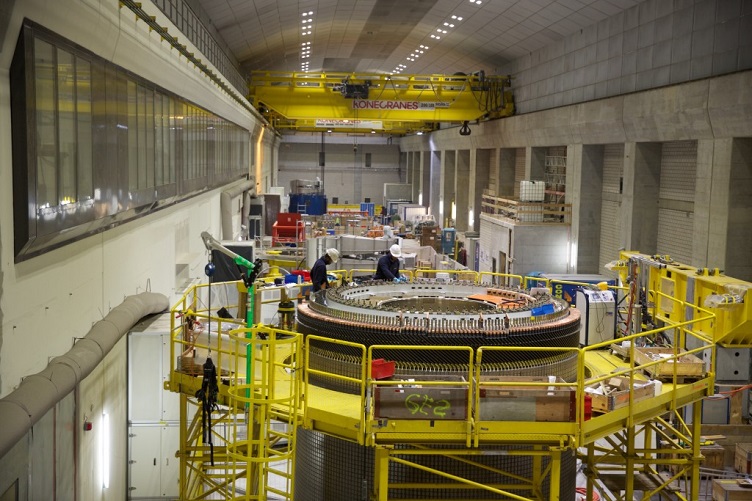 The generator hall deep inside the mountain. In the front, workers are assembling the rotor for one of the pump turbines. Since it’s too large to transport through the network of tunnels, workers must assemble some equipment on-site. Image credit: GE Reports/Tomas Kellner

The plant uses one of a kind variable speed technology, which uses gravity as a power source. A few more renewable energy power plants this one and the world will enter into the future of energy. Altogether, the steel valves controlling water make it possible to change the power plant’s net energy output. As a result, it is able to meet the surge in demand, and help utilities stabilize the power grid and reduce black-outs.

The future of energy is secure, after all, it’s a big win using gravity as a renewable energy source. At its peak, the plant can reach as high as 80 percent. When all four generators are in operation, the output will be a staggering 1,450 megawatts of renewable energy. For one thing, this much energy is enough to power a million homes during peak consumption times.

Anna Domanska
Anna Domanska is an Industry Leaders Magazine author possessing wide-range of knowledge for Business News. She is an avid reader and writer of Business and CEO Magazines and a rigorous follower of Business Leaders.
« Emirate’s Biggest Banks Merge to Create Middle East’s Powerhouse
The Surprising Reason Why Employees Trust Their Managers »
Leave a Comment
Close