US labor charge filed by Wal-Mart against its union 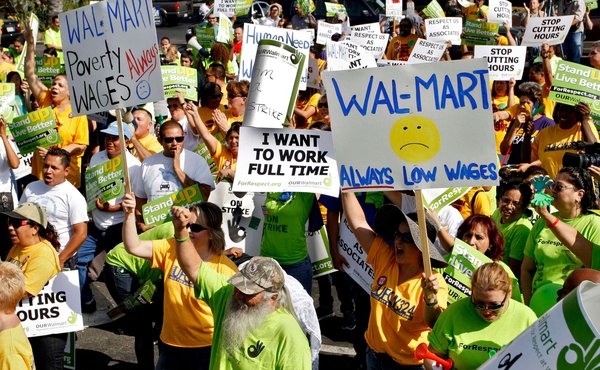 There have been extensive protests outside Wal-Mart stores now for over months. Wal-Mart Stores Inc. has now decided to take on legal action for the first time against their union who they believe is behind these actions.

Wal-Mart files charge against Union owing to unfair labor practice and months of unrest and protests outside Wal-Mart stores. Wal-Mart Stores Inc. has brought this charge against the UFCW or the United Food and Commercial Workers International Union thereby asking them to stop what according to the retailer are unlawful attempts aimed at disrupting their business. Wal-Mart files charge against Union just before a week of expectedly the biggest organized action against the topmost retailer of the world. A group of a few workers has prepared to showcase protests outside Wal-Mart stores and go for a strike on perhaps the busiest shopping day of a year, Black Friday. According to a spokesman for Wal-Mart Stores Inc., David Tovar, the legal action is mainly due to the fact that they cannot let the union create an environment that will either directly or indirectly affect their business or their customers.

According to Jill Cashen, the UFCW director, Wal-Mart is helpless as he thinks that there is nothing in the law that provides the employer the right to silence or prevent their workers. Rallies and protests outside Wal-Mart stores all over the country apart from actions like flash mobs organized by various groups like OUR Wal-Mart, which is the alliance of numerous previous and present workers of Wal-Mart Stores Inc. The primary aim of these protestors is to push collectively for better working conditions, wages and benefits. As an effect Wal-Mart files charge against Union thereby indicating to the fact that the union can expect this and a lot more unless they resist in their actions. According to Harley Shaiken, who is a professor of the University of California, Berkley and specializes in the labor issues, the public way of response from Wal-Mart Stores Inc. is indicative of the fact that do not intend on letting this go too far.

According to Steven Wheeless, the outside counsel for Wal-Mart Stores Inc., operations of the union have not only disrupted their business but also developed a an environment of confusion and discomfort in the minds of their customers. The National Labor Relations Act prohibits picketing for more than a period of 30 days without a representative petition filing. The OUR Wal-Mart group of the former and the current workers organized several strikes and protests apart from the online actions that started only this week and they will supposedly cumulate on Black Friday. According to the Wal-Mart Stores Inc., the union will be held responsible for any kind of injury or damage to its property caused by their operations. Wal-Mart Stores Inc. has roughly 1.4 million workers in the US and among the 5 million applications that it received in the year 2011, 20 percent of hired workers returned to the company.