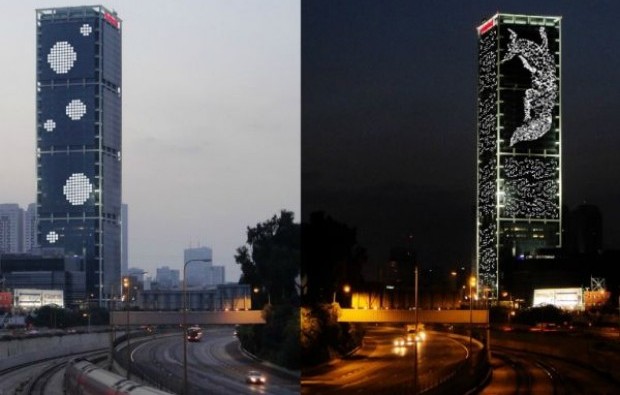 Zero-energy, flexible light displays that project the city of tomorrow as being an array of buildings with a constantly changing, customizable display arena, UrbanTiles is a concept created by Israeli industrial designer, Meidad Marzan, for his graduation project at the Bezalel Academy of Art and Design.

The concept involves the use of a matrix of dual-sided linking tiles that wraps around the exterior of a building. These reversible tiles would have organic photovoltaic cells on one side to collect energy during the day, and OLED (organic light emitting diodes) lighting panels on the other side to emit the harvested energy at night.

“The city and its buildings are epic light objects that emit light energy as far as the outer space”, explains Marzan about his project. “That, while in daytime the city absorbs great sun energy not being used at all. The cycle of light and lighting in the urban space made a design intervention, that along with other urban values, stood [as] the basis of this project”.

The project could potentially revolutionize the way our cities are lit at night and also offer a much more environment-friendly, customizable solution for urban lighting.

As part of his project, Marzan also presents the option that, the OLED panels, during the solar charging state, could be used to create entertainment display screens for spaces on the inside of buildings.

And how could an innovation like this not draw on the current “lead-by-touch-technology” generation?

Marzan suggests that the UrbanTiles could be further customized by using an intuitive interface that would allows users to draw on them with their finger – using them sort of like tablets essentially – to change the pattern of the light emitted.

At an overall level however, the nature of the OLED technology, allows it to be used for a variety of different applications. Given that OLED displays, unlike LCDs, which require backlighting, are “emissive” devices, i.e., they emit light instead of modulating transmitted or reflected light, the used of OLEDs also offer a number of other benefits, such as low power consumption and economic production.

Given that OLEDs offer characteristics that make them available for use in relation to a wide range of electronic devices, and within this, given the significant economic and environmental advantages of using this technology, market experts are already foreseeing the application of OLEDs in sectors such as personal computers, cell phones, televisions, general wide area lighting, signs, billboards, etc.

Though still in its nascent stage, given the potential presented by such a technology, the OLED market in 2010 was already estimated as being worth over $2 billion.