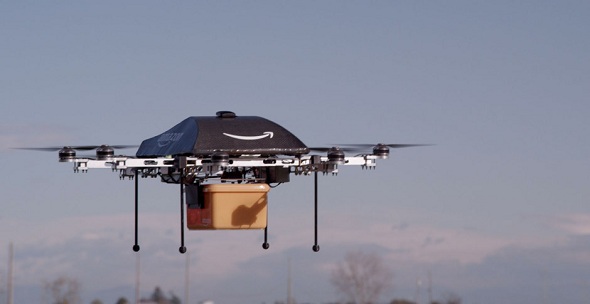 If Amazon is planning to move right on schedule, it might soon begin its outdoors testing abroad.

Amazon sent a letter to the Federal Aviation Administration monitioning that it would “have no choice” but to move a majority of its drone research outside the United States if it wasn’t allowed to carry out more testing outside soon.

At present, Amazon is testing its delivery drones, which it hopes will gradually be able to safely deliver packages to customers in 30 minutes or less. In its letter, Amazon said that it would like to carry out more testing in the U.S. America’s biggest e-tailer is powerless due to several FAA restrictions, one of which limits commercial testing of drones outdoors until official drone safety regulaions are released in the coming years.

Currently, Amazon is testing its delivery drones in its indoor labs. In its letter, the e-tailer emphasized its request, which was initially recorded almost five months ago, that it will test its delivery drones on “private property in a rural area of Washington State, away from people or crowds” under the supervision of trained pilots and at low heights with the help of geofencing.

The FAA allows “experimental certificates” to permit certain tests, yet it hasn’t allowed one to Amazon yet. It has been working with Amazon on an experimental certificate and is expecting more information. In the letter, Amazon wrote down that the procedure for getting a trial certificate is unnecessarily difficult and ill-suited to the quick pace with which Amazon needs to advance with the testing.

“Our continuing innovation through outdoor testing in the United States and, more generally, the competitiveness of the American small UAS industry, can no longer afford to wait. Amazon is increasingly concerned that, unless substantial progress is quickly made in opening up the skies in the United States, the nation is at risk of losing its position as the center of innovation for the UAS technological revolution, along with the key jobs and economic benefits that come as a result.”

If Amazon is planning to move ahead right on schedule, it might soon begin its outdoors testing abroad.

“Without the ability to test outdoors in the United States soon, we will have no choice but to divert even more of our [drone] research and development resources abroad,” Paul Misener, Amazon’s vice president of global public policy, writes.

Earlier this year, Amazon had asked for permission to fly its drones outdoors near one of its R&D labs in Seattle. Despite everything it is still sitting tight for the authorization letter. In 2013, the government offered more than six different sites for companies wanting to test drones for commercial use. Amazon’s hasn’t been granted any region yet, and the organization included that it’d be illogical for “it to pursue the test sites as our sole method of testing at this time.”

Currently, the U.S. has less than 10 approved commercial-drone operators, while Europe has the same in thousands. The FAA recently announced that it has issued around 200 trial certificates to drone manufacturers since 2005 and that these permits are more fitting for experimental flights than the exception Amazon is trying to get from the government.