Up, Up and Away at Mount Roraima 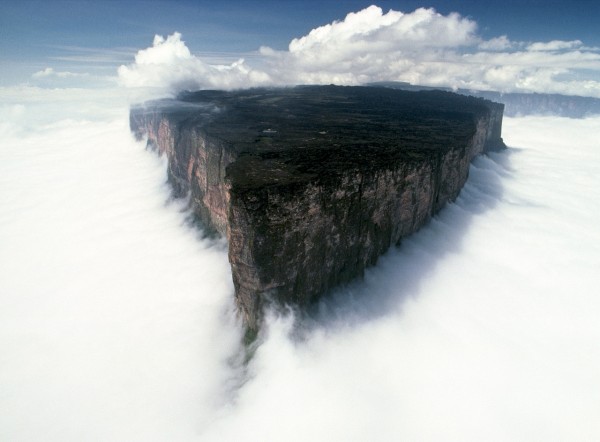 Within the heart of Venezuela’s dark and mysterious jungle lie islands; not islands with coconut laden palm trees swinging in the warm summer breeze or crystal blue water lapping backwards and forwards onto white sandy beaches, but isolated islands of sandstone which have eventually been forgotten by time.

To the Pemon, the aboriginals of the region known as the Gran Sabana, these flat-topped mountains are called tepuis. Mount Roraima is the tallest of tepui plateau in the Pakaraima chain in South America. Mount Roraima is on the three borders of Venezuela, Guyana and Brazil. Most of these tepuis are remote and are almost permanently shrouded in mist and clouds, even during the dry season. Thunderstorms are frequent and heavy downpours are a way of life. Some of the tepuis even have swamp-like surfaces while others have been washed by rainfall to almost sheer sandstone.

Well, this might look like it’s straight out of a sci-fi movie, but this natural wonder is completely real, and totally breathtaking. Mount Roraima, bordered by Venezuela, Brazil and Guyana, is surrounded on all four sides by sheer 400-meter high cliffs. While its cliff walls are only scalable by the most experienced of climbers, there is a hiking path up the mountain’s natural ramp-like path, usually a two-day hike. Cerro Autana is to the south of Puerto Ayacucho, a city on the outskirts of the Orinoco jungle near Colombia. This is a sacred mountain of the Piaroa Indians who believe it is the trunk of the tree bearing the fruits and seeds of the land.

Mount Roraima is only 1220m high but has a labyrinth of caves near the summit. During certain times of the year, the sun’s rays shine in on one side of the mountain and out the other. Nearby is Cerro Pintado or the Painted Mountain, which has the largest petroglyphs in Venezuela, including a fifty metre snake that is said to represent the Orinoco River.

Mount Roraima is worth a visit for more reasons than its impressive cliffs. The majestic Mount Roraima is the highest mountain in the Pacaraima Mountains. Mount Roraima is part of Venezuela’s Canaima National Park, a UNESCO World Heritage Site. Angel Falls is also part of this beautiful park. Mount Roraima’s highest point is Maverick Rock at 2,810 meters (9,219 feet), and the whole of Mount Roraima’s fairly flat top surface area is surrounded by 400+ meter (1,312+ feet) high sheer cliffs.

Mount Roraima can be climbed, though all routes besides the Paraitepui route require technical climbing gear. Mount Roraima, part of Venezuela’s 30000-square-kilometer Canaima National Park, is the site of the highest peak of the country of Guyana’s Highland Range. The mountains of this range, including Roraima, are considered to be some of the oldest geological formations known, some even dating back to two-billion years ago. Mount Roraima’s near daily rains have also created a unique ecosystem which includes several endemic species, including a unique carnivorous pitcher plant, and some of the highest waterfalls in the world.

Mount Roraima has long held significance to the aboriginals of the area and features prominently in their legends and folklore. It was also the inspiration for the Sir Arthur Conan Doyle’s novel, The Lost World. This breathtaking mountain also made an impact in the entertainment world. Mount Roraima was the inspiration for Academy Award winning movie Up’s Paradise Falls.

Mount Roraima possesses a spectacular array of unique and beautiful flora and fauna. Each level of Roraima contains a distinct vegetative zone with its own collection of flora that adapted to survive to the appropriate type of soil and climate. Mount Roraima’s lush tropical rainforest causes light to be sporadic. Insectivorous plants have adjusted perfectly to life at the summit due to the poor and acidic soil located there.

Similarly, the base of the mountain serves as a home to a plentiful amount of carnivorous plants. Unique, incomparable and rich are the only ways to describe Roraima’s biogeography. The steep sides, encircling rainforests, and altitude produce a distinctive climate in the surroundings that are significant for its ever-changing nature. Humid air rises off the rainforest along with the heat of the tropics to create intense clouds of rain that roll upwards to the top of Roraima and set off repeated rain showers. The elevation makes the nights chilly.

Mount Roraima has a fluvial landscape. Streams are perennial due to the lack of a dry season. These meandering streams flow all year long. Streams on Mount Roraima may appear calm, but they do have a high velocity which can make for quite a challenge. Fluvial erosion on Roraima has led to uniquely shaped valleys. Mount Roraima’s streams can easily reach stability and balance with the aid of Angel Falls. Since the waterfall is so tall, a large break in slope occurs and knick points are readily removed.

The vast supply of flora and fauna found on Mount Roraima exists nowhere else in the entire world. Incredible scientific advancements have been made due to this fact. Botanists and biologists travel to the mountain to gain a better understanding of the evolution of these species. There are some plants on Roraima that are descendants of extinct breeds.