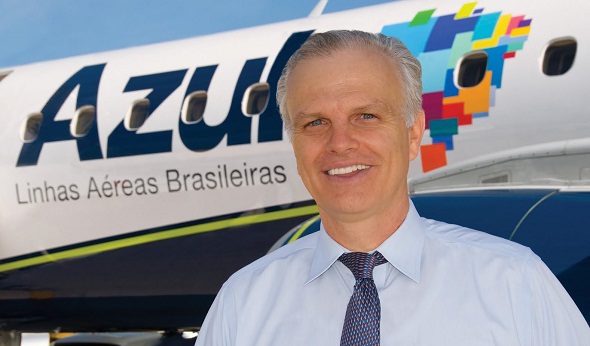 United Continental Holdings Inc., the owner of United Airline, announced on Friday that it will invest $100 million for a 5 per cent stake in Azul Linhas Aereas Brasileiras SA. Currently, Azul is Brazil’s third-largest airline, after Gol, and TAM that holds a 17 per cent stake of the local aviation market.

The agreement will give United Continental a seat on the board of the discount carrier that serves the most destinations in the nation – 105 – and operates more than 900 daily flights. The company has carried 21 million passengers last year, and has a fleet of 145 aircraft.

American David Neeleman will continue to control Azul by holding a 67 per cent stake in the company, after the deal gets approved. Additionally, the deal paves the way for an enhanced code-sharing agreement between the Brazilian airline, and the United States airline, with subject to government endorsements, and growing connections opportunities.

David Neeleman founded Azul – a serial airline entrepreneur, who has started four low-cost carriers that begun flying in late 2008. Neeleman, was the winning bidder in the privatization of state-owned Portuguese airline TAP, after acquiring a 61 per cent share in the debt-ridden carrier earlier this month.

Azul started flying in late 2008. The third, and Neeleman’s best known, is JetBlue Airways Corp. in the U.S., which started flying in 2000. JetBlue forced out Neeleman in 2007, and the executive, who has U.S., and Brazilian citizenship, traveled south. He began Azul on a similar platform: generous legroom, complimentary refreshments and snacks, in-flight entertainment, and low fares.

Azul that has its main base in Campinas, around 50 minutes from downtown Sao Paulo, got a support in 2012 when it acquired another Brazilian discounter, Trip. Azul additionally operates at least 50 daily flights from Sao Paulo’s Guarulhos International Airport, an airport terminal United serves from the U.S. On Friday, Neeleman at a news conference in Sao Paulo said that this would be useful for their customers.

With this association, they’ll have the ability to go from Santos Dumont Airport (in Rio de Janeiro), or from Porto Alegre to Las Vegas, for instance; but he declined to say, how Azul will make use of the proceeds.

United Continental Vice President Jim Compton said at a press conference that Brazil is a significant market in the United’s global route network, and this alliance with Azul further strengthens their ties to the region.