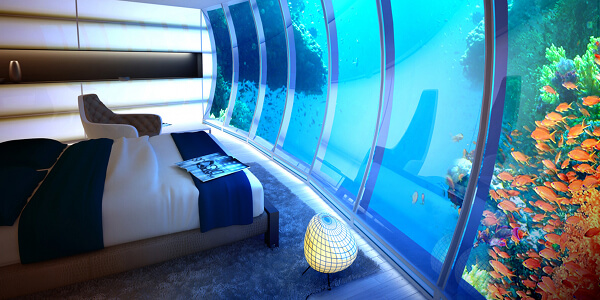 The World Discuss Hotel to be built in Dubai

Some unimaginably futuristic plans will never be pursued, but some will… Despite the fact that idea of the cities of the future is still more or less on paper, underwater hotels are going to get us closer to a vision of our fate.  Even though the Rangali Islands Resort in the Maldives glories in the title of the world’s first “underwater hotel”, on the horizon there is a new project which will certainly be revolutionary – the World Discus Hotel as it is to be the largest underwater building.

The underwater World Discus Hotel, which has been designed by Poland-based company Deep Ocean Technology in collaboration with, inter alia, scientists and engineers from the Faculty of Ocean Engineering and Ship Technology, Gdańsk University of Technology , has delighted investors from all over the world, including Dubai. But it is not much surprising as Dubai is known for its partiality to everything what is new or extravagant, just to mention the emirate’s plans to build the world’s largest mall and the world’s tallest building. Indeed, Dubai likes to boast and the construction of the underwater hotel would be another reason to do that. Even though the World Discus Hotel will not be the first underwater hotel, it would be the largest one!

According to plans, the World Discus Hotel will include two discs; bigger one will be under water, smaller one suspended above the surface of water. Both discs will be connected by a construction of five legs. Some compare the design of the World Discus Hotel to an UFO or the Starship Enterprise as its aesthetic looks like taken from science-fiction films.

The World Discus Hotel will be equipped with an evacuation mechanism which is aimed at securing the safety of the future quests.  According to the design, the underwater part of the hotel is to contain 21 hotel rooms, not to mention a dive center and a bar. Deep Ocean Technology and Swiss-based firm BIG InvestConsult AG underlined that future guests of the World Discus Hotel would be able to admire the beauty of the sea life as rooms were designed to ‘integrate with the underwater world as closely as possible’.

A strong advantage of the design of the World Discus Hotel is a fact that it can be moved to a different place in case of environmental or safety concerns. This is possible as designers decided to make the surface discs of the underwater water floating and transportable.  As it has been underlined by Bogdan Gutkowski, president of Swiss-based firm BIG InvestConsult AG, the design of the World Discus Hotel brings a new quality as well as opportunities which open a substantial debate on building new underwater ecosystems.

Prototype to be built in Gdynia

A prototype of the World Discus Hotel is to be built in Gdynia, Poland, and the company is to start construction in 2013. Deep Ocean Technology has explained that the prototype will be helpful when it comes to correcting details of the design. It has been underlined that each project will be adapted to specific conditions of the place where the hotel will be built.