Ultra-high-definition televisions will soon be affordable for everyone 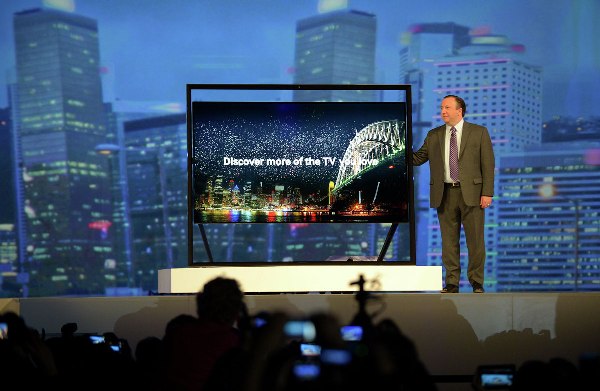 As if smartphones and tablets were not enough, Samsung is planning to popularize ultra-high-definition televisions. This aim will be one of the major focuses for the South Korean technology giant during 2014, according to the company’s co-CEO Boo-keun Yoon, who was interviewed at the Consumer Electronics Show (CES) in Las Vegas.

What is about to come

Even though Boo-keun Yoon seldom speaks directly to the mass media and press, CBC News got an exclusive sit-down interview where he disclosed some of the areas that Samsung Electronics considers will drive the technology industry in 2014. The list clearly includes higher-resolution panels. Yoon, who became co-CEO of Samsung Electronics in March 2013, is recognized for his leadership and has been acknowledged for taking the South Korean tech giant to the top spot of the television market worldwide.

One of his main goals is that this year big screens that go further the image quality of standard high-definition displays will go down in prices and become affordable for the average consumer market. In 2013, when the first ultra-high-definition televisions appeared in the market at sky-high prices, it seemed likely that a great deal of time would be needed before this kind of technology became affordable enough for mainstream customers. However, according to Yoon, things within the television market worldwide are changing faster than predicted. “The price gap between HD and UHD will be less than 10 per cent by the end of this year,” he said.

This ultra-high-definition television—also known as 4K because of the almost 4,000 pixels of horizontal resolution on screen, double that of a regular HD screen— is a natural evolution of the flat screen technology, Yoon explained. As such, it does not need the same investment in new production infrastructure that 3D television required some years ago, which is helping prices fall quickly. For now, existing 50-inch UHD televisions are currently purchased for about $3,500. If Yoon’s cost prediction is accurate, higher-resolution panels will soon make the transition from being a luxury entertainment device to a natural screen-replacement option for mainstream customers.

Along with higher-resolution panels, Samsung also expects to increase 3D screen sales within the television market worldwide and is already planning on getting further 3D content from Netflix, Google, Amazon and other content giants who have already committed to produce and distribute video in the higher resolution, Yoon explained. “We’re also working very hard on co-operating with content providers such as Netflix, M-GO, Amazon, Comcast, Time Warner Cable… so that customers will end up with more content,” he said.