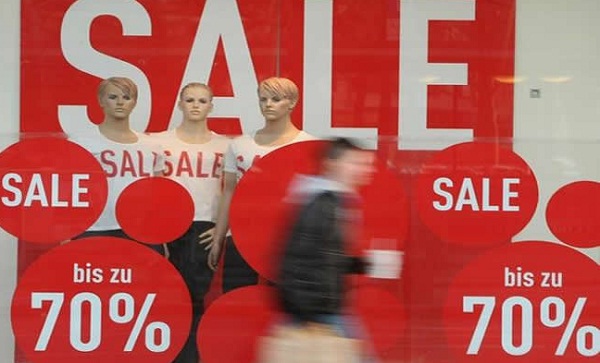 After all, the rate of UK shop price inflation slumped significantly in April, reaching its lowest level in more than three years. The slump in UK shop price inflation was mainly driven by countless promotions and dropping commodity prices. Indeed, UK retailers have been doing whatever it takes, including price cuts, to lure customers to their stores.

On the 7th of May, the British Retail Consortium (BRC) released its data, pointing out that UK overall shop price inflation slumped to approximately 0.4 percent in April, compared to about 1.4 percent in March. Certainly, this substantial drop was driven by UK retailers’ attempt to attract customers to their shops. According to the figures released by the British Retail Consortium, the United Kingdom saw food inflation dive to 2.9 percent in April from around 3.5 percent a month earlier. What is interesting is the fact that non-food products recorded deflation in April with the index dropping to approximately -1.0 percent.

BRC Director General Helen Dickinson underlined: “In April, overall shop price inflation was sharply down on the previous month, to its lowest for three and a half years, as a result of retailers working harder on promotions to encourage customers and the easing of some commodity costs,” adding that the most fierce competition was witnessed in the non-food sector.

Indeed, stores did everything in their power to lure customers to their shops. Data showed that they decided to reduce the price of clothes and shoes by staggering 4.7 percent. The fact is that all these promotions were aimed at increasing sales of spring collections as UK customers mostly stayed at home and they simply did not want to bother themselves with shopping because of the cold weather. Undeniably, the chilly weather scared off clients so that UK retailers suffered from the low temperatures as well. Therefore it is not surprising that in April UK retailers decided to introduce price cuts and different promotions.

Certainly, information on the drop in the shop price inflation in April is somewhat relief for UK customers who have been struggling to meet ends due to harsh economic conditions. The aforementioned figures showed the UK retailers were forced to cut prices to lure customers to their shops. But the fact is that UK customers still have to face high costs of gas and electricity.

The fact is, however, that UK customers have to fork over their savings. Yet some analysts are strongly convinced that food prices should remain at the current level or might even decrease.

However, UK customers will be very cautious in the near future as their behavior is subdued by weak wage growth and harsh austerity steps taken by the government. Thus also the UK retailers are careful when it comes to being optimistic, especially taking into consideration the findings by Visa indicating that consumer spending in the country dipped approximately 2.5 percent in April from the month earlier.

Anna Domanska
Anna Domanska is an Industry Leaders Magazine author possessing wide-range of knowledge for Business News. She is an avid reader and writer of Business and CEO Magazines and a rigorous follower of Business Leaders.
« Barnes & Noble goes the Google Way
Little sunshine over China as trade growth in April beats expectations »
Leave a Comment
Close