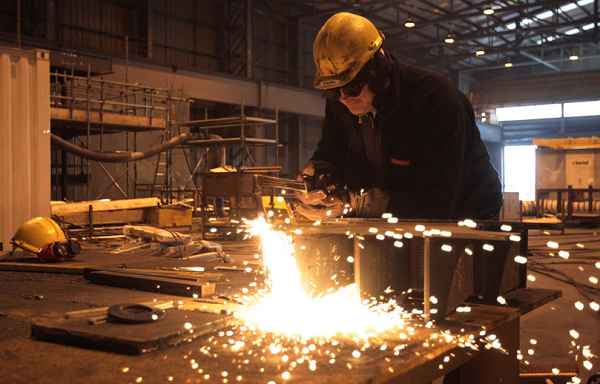 On the 3rd of December, Markit Economics and the Charter Institute of Purchasing and Supply released its data on the UK PMI showing that the British manufacturing activity improved at a faster rate than initially estimated in the month of November.

Released data showed that manufacturing activity in the UK saw a slight increase in November. According to the Markit/CIPS PMI, the UK manufacturing sector rose to 49.1, compared with 47.3 in October. The November’s UK PMI is also the highest since August. In addition, it has also exceeded the average analysts’ estimate of 48.0.

Even though some analysts claim that the results are satisfying, the UK manufacturing sector still is stabilizing.

Data showed that new orders dropped for the second month, reaching 49.7, yet it was up from 47.7 noted in October. Certainly the global economic uncertainty had a major impact on the decrease in new export orders.  However analysts underlined the fact that new orders in the manufacturing sector remained mostly steady. In addition, production at UK factories saw a growth for the first time in five month.

Implemented easing inflation measures, which were aimed at spurring UK customers to spend more, were dashed by manufacturers’ decisions to raise their prices. Prices increased at the fastest rate since June.

According to released data by Markit/CIPS, factories downsized its labor force again in the month of November.

One of few optimistic findings of the survey was the continual strength of investment plans. Taking into consideration the decrease in overall confidence and current worries over financing, there is a high probability verging on certainty that many of those intentions will not come true.  Tom Lawton, Head of Manufacturing at BDO LLP, underlined: “Investment intentions seem to be defying gravity but the ongoing issues around access to capital and an unsupportive tax structure may yet have a serious impact on actual investment.”

On the 5th of December, the Chancellor of the Exchequer George Osborne is due to present is autumn budget statement to Parliament. Given the growing pessimism, the Chancellor George Osborne is widely expected to defend austerity measures, not to mention that economic and fiscal forecast for the UK are projected to be cut. Analysts and institutions have tried to convince him to launch more supportive policies aimed at lifting the UK manufacturing sector and improving UK economic growth as well.

In the past four years the United Kingdom has experienced two recessions, even though that the Bank of England cut interest rates to approximately 0.5 percent and printed as much as 375 billion pounds just to support growth.  Many analysts highlight the fact that the recovery of the UK economy has been delayed by the debt crisis in the eurozone as well as the austerity measures. In addition, demand in home markets remains weak which also raises UK manufacturers’ concerns and doubts.

Anna Domanska
Anna Domanska is an Industry Leaders Magazine author possessing wide-range of knowledge for Business News. She is an avid reader and writer of Business and CEO Magazines and a rigorous follower of Business Leaders.
« Starbucks talks with HMRC might lead to change in its UK tax approach
UK retail sales climb in November, but customers await holiday bargains »
Leave a Comment
Close