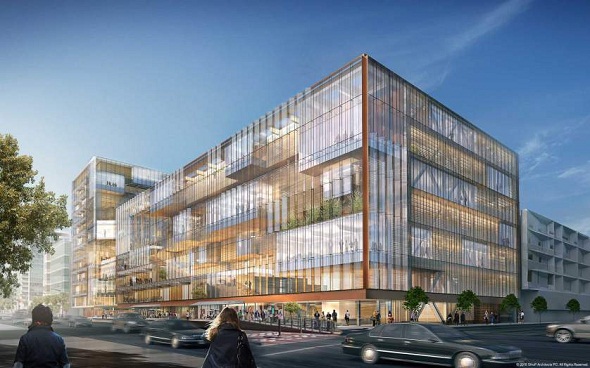 Uber has revealed plans for constructing giant glass headquarters in San Francisco. It will soon start working on its new headquarter plans and design mockups for erecting the building. Late in September, Uber announced its joint venture with Alexandra Real Estate Equities to develop its new headquarters, and received request for qualification- RFQ, for the project on Wednesday.

As part of that bid, Uber has released a few key details about its new project plan that will include construction of two corporate buildings’ campus in San Francisco’s Mission Bay neighborhood, which will occupy more than 423,000 square feet of new offices space, and retails space to the company.

Uber’s new building will look like a glass warehouse, in which the first building will include 11-story tower at 1455 street, and another six-story structure at 1515 Third street, which are designed to be connected by slanted glass walkways.

Its outside buildings’ appearance would be fully covered with glass, and plans to go transparent from inside, making its workplace vibrant. It decides to have series of small group workstations, and shared space rather, having an open office framework that are accessed by collaborative work zones and shared support. The company expects that the new corporate building should help consolidate its employees in San Francisco, which at present is spread across a number of different buildings, and floors in San Francisco.

Currently, Uber’s headquarter building occupies four non-consecutive floors in one main corporate building in the Mid-Market area, as well as an additional office space in two other buildings in the city.

Its architectures are planning to integrate retail shops in the ground level of both the buildings, providing basic amenities for public, as well as streetscape improvements to the adjacent Pierpoint Lane (an intersection pedestrian way), which is very important for keeping the area alive. The company has at least 3000 employee across the globe, but it wouldn’t break out how many of its workforce are based in San Francisco.

An official representative stated about the project that Uber was debuted in San Francisco city, and it has a very special place for our company. The company is excited to expand and enhance their business presence, investing in the San Francisco’s Mission Bay neighborhood. As part of the standard request for qualification (RFQ) process, they’ve released renderings and design mockups of the new buildings.

Uber expects to inaugurate its new corporate headquarters late in 2017, or early in 2018 opening for its new building in the San Francisco.

Christy Gren
Christy Gren is an Industry Specialist Reporter at Industry Leaders Magazine she enjoys writing about Unicorns, Silicon Valley, Startups, Business Leaders and Innovators. Her articles provide an insight about the Power Players in the field of Technology, Auto, Manufacturing, and F&B.
« JPMorgan layoffs about 5000 jobs over the next years
Woolworths calls off AU$1 Million in E-Gift Cards after Massive Data Breach »
Leave a Comment
Close