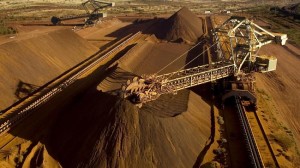 Primarily powered by surging demand from Asia, the Anglo-Australian mining company has also consequently announced a huge increase in its dividend as well as a $5bn share buyback to soak up surplus cash.

Rio Tinto has benefited massively from soaring commodity prices, with iron ore (an essential component for steel) and aluminium prices up more than 50% in 2010 and copper prices doubling.

Having made a dramatic comeback in the past two years after overstretching itself during the credit boom, when the acquisition of Alcan, an aluminium producer left it with debts of $40bn, Rio announced yesterday a 40% raised in dividend alongwith the $5bn, reporting record profits on higher prices for iron ore and copper

While Rio’s borrowings at the end of last year had been cut to little more than $4bn, many credit rating agencies have still not restored Rio’s single-A rating that would make it cheaper for the company to raise fresh capital.

Rio boosted its final divided to 63 cents a share from 45 cents a year ago, bringing its full-year payout to 108 cents. The total dividend for 2010 forms the basis of a new “progressive” policy aimed at boosting the U.S. dollar value of payouts over time, Rio said. 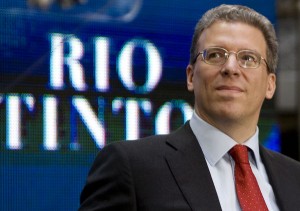 Caution amidst the Ecstasy

Despite the high euphoria levels that are bound to be felt at Rio Tinto, Chief executive Tom Albanese sounded a note of caution, saying prices faced bouts of volatility, with the possibility of financial shocks emanating from the US, where public debt is high, or from China and India, where inflation and economic overheating are ever-present dangers.

“In particular, the timing and speed at which post-global-financial-crisis stimulus packages are removed has the potential to generate both volatility and substantial swings in commodity prices.” he said

With regards to the latest commodities boom that has seen oil hit $100 a barrel being cited as an unsustainable bull run by many business analysts, Albanese said the upward trajectory in prices had been exacerbated by the speculative buying of exchange traded funds – investment products that allow investors greater exposure to commodities.

“People today view commodities as an asset class in themselves and they tend to buy and sell at the same time. That injects an element of uncertainty.” He said Rio was well placed to cope with the risks of short-term volatility “and long-term demand growth”.

“Rio is reinvigorated, running strong and benefiting from favourable markets,” said Albanese. “Our long-established strategy of focusing on long-life, cost competitive, expandable assets, together with our increased investment in technology, means we can enhance shareholder value over the long term.”

As of 2021, over 150 million US workers identified themselves as self-employed. This means that they are responsible for their own retirement plans. Employees of big firms tend to
13 hours ago

Just shy of her 40th birthday, Vera Wang struggled to find a bridal gown that suited her taste. Her father pointed out her struggles for what they really were – a remarkable busi
13 hours ago

In the memo obtained by Geekwire, Nadella writes that he is aware of how much their talent is in demand. He appreciated their efforts in keeping the company running and thanked hi
19 hours ago