TransferWise unicorn with the recent announcement of attaining profitability is holding a significant place in the international money market. The London-headquartered fintech is now targeting traditional banking by setting up ‘borderless’ bank accounts.

The peer-to-peer money transfer fintech is now looking beyond simply sending the money from one border to another. The company is planning to launch borderless accounts for the businesses, freelancers and sole traders who need a multi-currency account for trading across borders. All those who need to exchange currencies across borders can have the benefit of the low exchange rates.

The fintech will start with rolling out the new service in UK and Europe. however, the global rollHHowever, the global rollout is planned in the end of the current calendar year. So, as we featured that TransferWise would be coming up something targeting the problem points of the customers, here we see their step into bank account itself.

The version of no border accounts for consumers will launch later the current year. A TransferWise debit card, not to our surprise, will also be launched. The fintech with its plans is looking forward to generating £100 million revenue this year.

The six-year-old fintech with the announcement of debit card launch place itself in the territory of neobank. The financial services startup is giving tough competition to the well-established foreign exchange startup Revolut which also promises low exchange rate.

However, the main target of the fintech is pitching in incumbent banks and sole trader market. The unicorn is attempting to resolve the problem of sole traders i.e., receiving and making payments in multiple currencies. 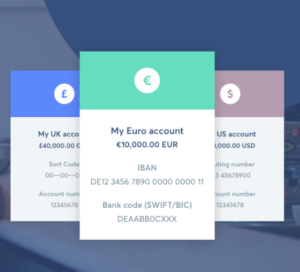 The borderless account by the unicorn offers account numbers in UK, Europe and US. It is similar to having local accounts in these countries. So, it would be like you can operate on local banks with the particular account number.

Now if you receive money into the particular account having matching currency, you won’t have to pay any exchange rate fee. For instance, suppose you receive currency in Euros in your own local account set in Europe. Hence, as no exchange occurs here, you won’t have to bear exchange fees. You can then move currency, if you need, from one country account to another. You have to bear only minimum mid-market exchange rate and commission. The fintech do not charge any extra minimum fees. TransferWise supports 15 internal currencies to make internal money transfer. Sounds much competitive!

To make payments from your borderless accounts, the unicorn has a small standard business charge. Notably, the fintech does not apply charges to receive payments and has no monthly fees provision.

Already, gaining a significant share of the international money market, this new introduction would let the $1.1 valuation bearing unicorn to enter potentially into banking.