Toyota’s hardy pickup truck is built to last and is reliable. Time and again, the Toyota Hilux has proved its toughness through years of driving in rough terrains including both the Poles and an erupting volcano, the company is not resting on its laurels and has come up with a new version, the Hilux 2021.

Fernando Alonso, the two-time Formula 1 champion and currently a test driver for Toyota’s kazoo racing team, recently drove the Hilux at the Dakar rally, which is scheduled to be debuted later this year.

The Japanese carmaker has set forth a teaser video for the pickup in anticipation of the launch. The Hilux has got a major overhaul under the hood with an updated 2.8-liter engine for more power and cleaner emission. 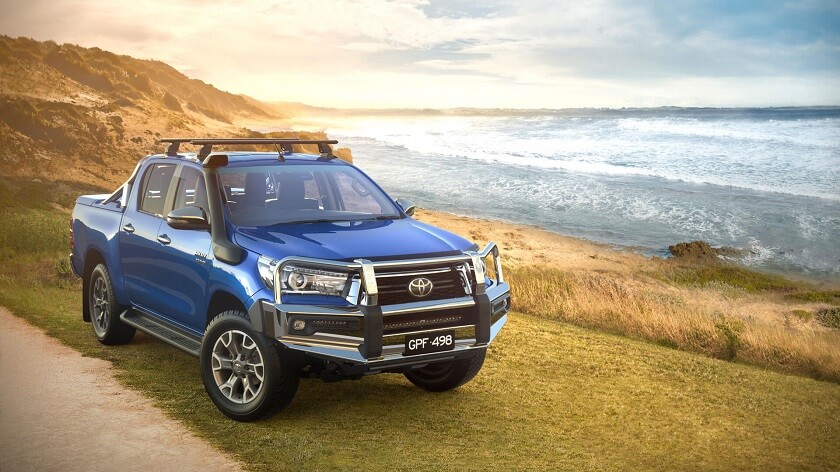 The diesel pickup has a four-cylinder engine that runs at 174bhp and 450Nm. “The upgraded HiLux range retains a 2.4-liter turbo-diesel and a 2.7-liter four-cylinder petrol engine along with three transmissions, 4×2 and 4×4 drive, three body styles (single, extra and double cabs), two configurations (pickup or cab-chassis) and five equipment levels (in ascending order: Workmate, SR, SR5, Rogue and Rugged X),” the media statement from Toyota says.

After seeing the Hilux’s performance in the Dakar Rally, where it stood 13th, its suspension and chases is more than ready for any challenges in terrains. Following tests on a gravel and dirt special stage, Alonso said, “the Hilux is an icon and I’ve always been a fan. It was good to test the new Hilux in a challenging environment and to push it to the limits. The new engine behaves well and the new suspension feels great. Even when you push it, the comfort is still there.”

Hilux has a new front-end with a three-dimensional grille and bumper. New LED light clusters have been added for higher beam and tailend. The truck will now be available in an additional color of bronze metallic.

Inside, the infotainment system has been updated with an 8.0-inch screen with new software that is more responsive and less distractive.

It comes with an Apple CarPlay and Android Auto features. The sound system is an 800W, 9-speaker JBL. The new 2.8-liter engine takes the Hilux from 0-100kph in ten seconds flat – a full 3.2 seconds faster than the 2.4-liter version.

The Hilux’s suspension and steering have been tweaked with improved shock absorbers and redesigned leaf springs, which give a smoother ride. It now comes with a lower engine idle speed, revised stability control, and a new tire angle monitor. The throttle pedal response has also been improved.

A range-topping Invincible X model has been added to the Hilux line-up in international markets, with a variety of styling upgrades, inside and out, over the standard model.

Pricing for the new Toyota HiLux is yet to be announced, but increases are likely when the range arrives in local showrooms.

The Hilux will most probably come with a service interval of six months/10,000km, similar to its earlier models.

Anna Domanska
Anna Domanska is an Industry Leaders Magazine author possessing wide-range of knowledge for Business News. She is an avid reader and writer of Business and CEO Magazines and a rigorous follower of Business Leaders.
« SpaceX Launches 60 Starlink Satellites for Megaconstellation
Tax Benefits for Individuals and Companies from IRS Due to the Pandemic »
Leave a Comment
Close