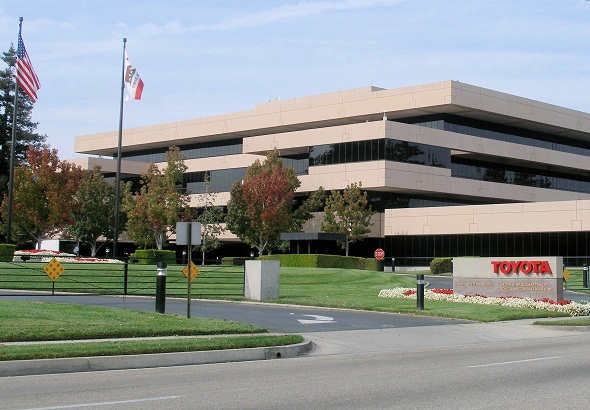 Toyota said Monday that it’s going to spread the adoption and further the development of the hydrogen fuel cell technology by opening up its patents to rival automakers, for free.

The announcement made at the annual Consumer Electronics Show in Las Vegas reflects a similar move by electric car manufacturer Tesla in 2014, when Chief Executive Elon Musk made Tesla patents available to all in the hopes of spurring development and introduction of innovative fuel cell technologies around the world. Toyota too has similar goals for the fuel-cell car market.

“At Toyota, we believe that when good ideas are shared, great things can happen,” Bob Carter, senior vice president at Toyota, said before the announcement. “The first generation hydrogen fuel cell vehicles, launched between 2015 and 2020, will be critical, requiring a concerted effort and unconventional collaboration.”

The world’s largest vehicle maker will open up access to 5,680 fuel cell-related patents held globally. Of those 1,970 relate to fuel-cell stacks, 290 associated with high-pressure hydrogen tanks, 3,350 related to fuel cell system software control, and finally there are 70 patents related to hydrogen production and supply, Toyota says.

Parts suppliers and energy companies can also use the patents. The cost-free licences will be permitted through the initial market introduction period of fuel cell vehicles (FCV), which will remain royalty-free through 2020.

“By allowing royalty-free use of FCV-related patent licences, Toyota is going one step further as it aims to promote the widespread use of FCVs and actively contribute to the realisation of a hydrogen-based society,” the automaker said in a statement.

The move came after Toyota last month unveiled the world’s first mass market fuel-cell car, the four door Mirai sedan in Japan. Mirai, which means future” in Japanese will hit the US and some European countries, including Britain, Germany and Denmark, in 2015, Toyota has said. The company hopes to sell more than 3,000 units of the car by the end of 2017 in the United States, and up to 100 annually in Europe.

Instead of gasoline, Hydrogen fuel cell vehicles are powered by a chemical reaction of hydrogen and oxygen. A fuel cell stack in the car then fuses that hydrogen with oxygen from the atmosphere in a process that generates electricity to power the vehicle’s motor, which produces nothing more harmful than water at the point of use.

However, due to lack of refuelling stations and limited driving range, the development of fuel-cell vehicles has been hampered. The all-electric cars and fuel-cell vehicles could play a significant role in reducing greenhouse gas emissions and slowing global warming, environmentalists say.

The Mirai can travel nearly 650 kilometres (400 miles) without the need to refuel, some three times further than an electric car and like gasoline engine vehicles, its tank can be filled within few minutes, according to Toyota.

Anna Domanska
Anna Domanska is an Industry Leaders Magazine author possessing wide-range of knowledge for Business News. She is an avid reader and writer of Business and CEO Magazines and a rigorous follower of Business Leaders.
« Chinese Tech Firm Xiaomi’s Revenue Doubles in 2014, Plans To Expand To More Countries
U.S. Steel to idle two tubular factories due to oil price collapse »
Leave a Comment
Close