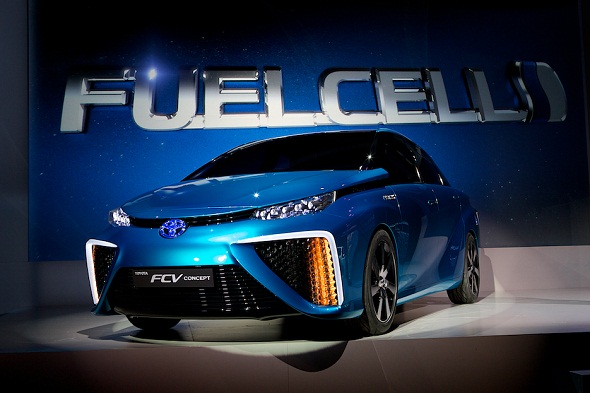 The Japanese automaker made the announcement on the eve of the Los Angeles auto show. The eco-friendly car can travel 300 miles (483 kilometers) deriving energy from a single tank of hydrogen and refuel in three to five minutes. Toyota has also pledged to build a dozen hydrogen refueling stations in the Northeast U.S. It is expected to go on sale in Japan soon, but no specific date was announced.

As it has done in Southern California, where it is helping to finance the construction of new hydrogen stations, Toyota will collaborate with France’s Air Liquide to develop and supply 12 hydrogen fueling stations in the five-state Northeastern corridor that consists of Connecticut, Massachusetts, New Jersey, New York and Rhode Island. Specific details of the collaboration will be announced later, Toyota said.

Toyota is one of several automakers who have been the most vocal proponent of hydrogen fuel-cell vehicles as the appropriate zero-emission solution for future transport. The cars emit only water vapor as oxygen from the air is combined with hydrogen fuel to generate electricity in the fuel cell.

Also automakers in California as well as across the U.S., Europe, Japan and South Korea are under pressure to offer zero-emission vehicles and reduce petroleum use.

The technology has been under development since long and in recent years the cost of fuel cells has dropped considerably. But even with the first fuel-cell vehicles hitting the retail market, infrastructure still remains a significant hurdle effectively limiting the range of a fuel-cell car.

In May, Toyota loaned $7.3 million to First Element Fuel, a startup particularly formed to provide hydrogen for the upcoming crop of fuel-cell vehicles. First Element Fuel Inc is using the funds along with a grant of $27.6 million from the California Energy Commission to build 19 hydrogen refueling stations in southern California within the next year.

“Toyota’s vision of a hydrogen society is not just about building a great car, but ensuring accessible, reliable and convenient refueling for our customers,” Jim Lentz, president of Toyota Motor North America, said in a statement. “I am happy to announce that this vision will expand beyond the borders of California and give customers the opportunity to join the fuel cell movement.”

The low center of gravity of Mirai provides it dynamic handling while its fuel-cell offers ample energy to power the car, Toyota President Akio Toyoda said.

“Our fuel cell vehicle runs on hydrogen that can be made from virtually anything, even garbage,” he said. “It has a fuel cell that creates enough electricity to power a house for about a week. This is a car that lets you have it all with no compromises.”

Anna Domanska
Anna Domanska is an Industry Leaders Magazine author possessing wide-range of knowledge for Business News. She is an avid reader and writer of Business and CEO Magazines and a rigorous follower of Business Leaders.
« Facebook updates its privacy policies to make it easier to understand
FTC says web privacy firm deceived consumers about recertification program »
Leave a Comment
Close

Stellantis, the carmaker formed earlier this year by the merger of Fiat Chrysler and PSA, has revealed that it no longer needs to buy emission credits from Tesla, which will result
21 hours ago

Anheuser-Busch InBev SA’s Chief Executive Officer Carlos Brito will step down from his role, effective July 1 and Michel Doukeris will succeed him as the new CEO. Brito, who beca
21 hours ago

Intel plans to invest $3.5 billion in its New Mexico factory as part of a plan to expand domestic manufacturing investments. This is one of the largest single investments by the co
4 days ago