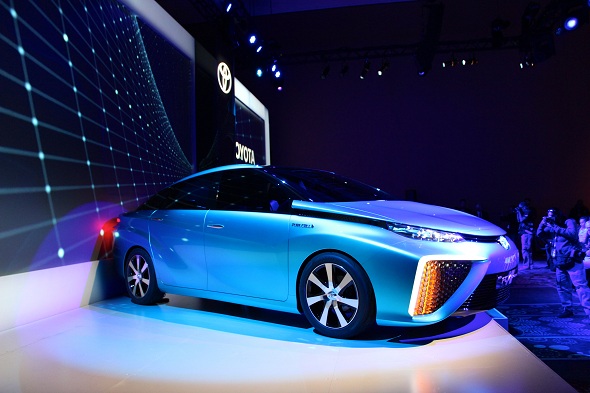 Toyota’s fuel cell car can travel about 700 kilometres without the need to refuel, about three times more than an electric car

The vehicle is scheduled to go on sale in Japan in March 2015, and during the summer of 2015 it will develop the environmentally friendly cars available in the United States and Europe.

Hydrogen is turning out to be a promising alternative fuel since it can be produced using a varied range of primary energy sources such as solar and wind power, the automaker said in a statement.

The car illustrates the approach Toyota will take toward zero emissions, selecting fuel cells over the plug-in electric technologies embraced by Tesla Motors Inc. The automaker will join Hyundai Motor Co. in overcoming the challenge of making these cars inexpensive and easier to use given the lack of refuelling stations.

Though fuel-cell cars are propelled entirely by electric motors, they are not required to be plugged into power outlets to store energy. Instead, hydrogen gas passes through a heap of plastic membranes and platinum-dusted plates to generate electricity. The stacks remain exorbitant because of the valuable metals needed, as do the high-pressure tanks.

Toyota’s fuel cell car can travel about 700 kilometres without the need to refuel, about three times more than an electric car, and it takes just around three minutes refuel, quite similar to a gasoline engine car, Toyota said.

Toyota is no stranger to facilitating new developments in the car industry. While not completely leaving out electric, the company views fuel cell as the next logical step after its big early success with the Prius, the first gas-electric hybrid vehicle available to a mass market, and topping the list in car sales. The company sold about 3.7 million units since its launch seventeen years ago.

The announcement came a day after Japan’s Industry Ministry said the government will join forces to support the hydrogen and fuel cell segment in a strategic roadmap.

Japan’s ruling party said the market related to hydrogen and fuel cell products and infrastructure is expected to grow from about one trillion yen in 2030 to about 8 trillion yen within the next two decades. The ministry is pushing for extensive subsidies and tax breaks to make fuel cell vehicles more accessible for general drivers and to reduce the price of a fuel-cell car to about $20,000 by 2025. The government said it will try to make hydrogen available at a cost similar to or less than gasoline fuel, while also developing 100 hydrogen fuel stations by the end of March 2016 in urban areas where these cars will be initially launched.

Potential customers seem to be happy with the pricing as it was widely expected that a fuel cell vehicle would cost around 10 million yen. However many impediments need to be addressed before fuel cell vehicles become a common sight on roads, most notably, the network of hydrogen refuelling stations, Toyota said.

The price ranges for a fuel cell unit for the United States and European markets have still not been decided, Toyota said.