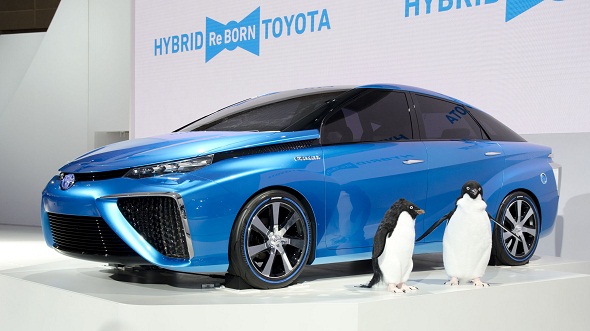 In what would be a turning point in automotive history, the world’s biggest carmaker Toyota has unveiled the assembly on which the fuel-cell car will be me made.

The car known as Mirai (meaning “future” in Japanese) will be the first mass market car that runs on electricity generated by the chemical reaction of hydrogen and oxygen. It does not emit carbon dioxide, but rather, water as the only exhaust. As compared to plugged in overnight cars, the sedan can drive for 300 miles, takes only about three minutes to refuel and comes with three years of free gas.

“We are thrilled to think that before everyone else, we are taking a historic step toward the establishment of a hydrogen society in Japan,” Toyota’s president, Akio Toyoda told reporters last month when he delivered a Mirai to the prime minister Abe’s office.

The Japanese carmaker plans to build just 700 units of the Mirai sedan by the end of December to feed sales in Japan, Europe and the United States. It is scheduled to expand to 2,000 vehicles a year in 2016 and 3,000 units in 2017.

Beginning next year, Toyota plans to sell the Mirai for about $45,000 in the U.S., including about $13,000 in federal and California incentives. It will sell to the public in Japan next month.

At 300 miles on a single tank, Mirai offers the farthest range of any electric vehicle on the market. However, hydrogen fuel cells come with their own challenges. To successfully sell in the U.S. the cars will require a countrywide infrastructure for refuelling. Even though its emissions are greener, hydrogen is mostly procured from natural gas, which carries its own environmental effects.

In its defence of hydrogen, Toyota says it will provide drivers a longer range and far quicker refueling times when compared to a battery-powered electric car.

Currently, Toyota is not the only carmaker pushing hard on fuel cells. Hydrogen-powered Hyundai Tucson is now available in California, and Honda’s fuel-cell car is expected to be launched in 2016.

Toyota recently opened its more than 5,000 fuel-cell related patents to rival automakers for free saying it wants to further the development of the hydrogen fuel cell technology and also to construct and fund new fueling stations, first in California and then stretching to the east coast. California is investing millions of dollars to construct 28 new hydrogen refueling stations.

Even Japan has proven to be far more embracing of the hydrogen fuel cell technology. The country has invested in self-service hydrogen stations, relaxed certain fuel-cell regulations and has also offered nearly 3 million yen (about $25,200) in incentives to early Mirai buyers.

Christy Gren
Christy Gren is an Industry Specialist Reporter at Industry Leaders Magazine she enjoys writing about Unicorns, Silicon Valley, Startups, Business Leaders and Innovators. Her articles provide an insight about the Power Players in the field of Technology, Auto, Manufacturing, and F&B.
« Google Chrome beefs up security from unwanted softwares, to warn users against visiting such sites
IKEA launches a new line of furniture with integrated wireless charging for phone »
Leave a Comment
Close