Toyota and Microsoft team up for Energy Intelligent Plug-In Cars

Toyota and Microsoft have announced the establishment of their new joint venture – Toyota Media Service Co. – which will function as a Toyota subsidiary.

To be developed with a total estimated investment of around $12 million by the two companies, the system devised by Toyota Media Service will aim at providing energy management data services to drivers, and will also include the use of Microsoft’s Windows Azure software for in-car entertainment and navigation.

The announcement of the formation of the Toyota Media Service Co., to develop in-car electronics systems for higher efficiency electric vehicles, was released through a joint webcast held by Akio Toyoda, Toyota President and Steve Ballmer, Microsoft’s CEO.

Using the Windows Azure cloud computing platform, the first application of this system will aim to manage energy use for the electric version of the Toyota Prius which is believed will come out in the first half of the following year.

According to Toyoda, the new system will maximize energy efficiency by connecting owners with their cars, home appliances and HVAC systems through smart planning such as scheduling maximum usage for times when rates are lowest, having your car ready when you are with its temperature preset, and even having your most efficient route already planned in the navigation system.

The system would also be equipped to control energy use in your home by turning down the air-conditioning/heating once you’re at work, and have it ready for you, with just the right temperature, as you get closer to home.

Talking about the potential presented by the new in-car energy management technology, Toyota’s CEO Toyoda said, “Our cars will play a big role in the global expansion of what we call ‘smart centers’ … on-board systems capable of better managing overall energy consumption of cars… driving trips…and homes… For example, this new system will include advanced car telematics like virtual operators with voice recognition … management of vehicle charging to reduce stress on energy supply…and remote control of appliances, heating and lighting at home.”

Intelligent systems that manage their electric cars entertainment and energy functions have been on Toyota’s priority list for a while now. 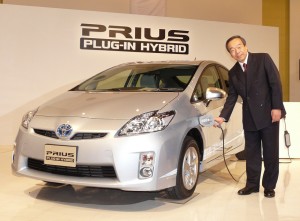 With the formation of Toyota Media Service Co., the automobile giant will now have full access to Microsoft’s vast technological infrastructure. According to Toyoda, this will significantly boost the value of automobiles, with the potential of turning cars into information terminals.

While current intelligent-technology-on-wheels primarily comprise the GPS navigation systems available in the market, these new energy-information management systems will also help enhance driver and traffic safety, in addition to all the features outlined above.

Windows Azure, Microsoft’s cloud computing system, which offers its services via the internet, is the system that will be used by Toyota Media Services for developing its intelligent systems.

Toyota is a mega-customer for Azure, a big early gain for Microsoft for its cloud computing system. According to reports from the carmaker, Toyota has been using Microsoft’s Azure system since last year to track the numerous roadside assistance calls for its Lexus cars.

Super-excited with his company’s further tie-up with Toyota, Steve Ballmer, Microsoft’s CEO said, “Starting in 2012, customers who purchase one of Toyota’s electric or plug-in hybrid vehicles will be able to connect via the cloud to control and monitor their car from anywhere… customers will be able to turn on the heat or AC in their car while their vehicle is plugged into the grid or dynamically monitor miles until the next charging station right from their GPS system.”